There are six metallic wrecking machines warming up their engines behind the starting line. They're lined up on a backroad somewhere in the far distance, but everyone knows that after the first turn the track will be full of pedestrians. A timer tells us that we have two minutes to finish, an absurd time limit as the course itself takes at least 15 minutes to complete. The race is off with a bang and we turn our blade-equipped car to the left. A load of bodies fly into the air, and all of a sudden we've got four minutes on the timer. What a great concept. Well, it was back in 1997. But as it turns out Carmageddon: Max Damage could just as well have stayed away, somewhere very far from our consoles.

The history of the series extends back almost two decades, and there is still to this day a faithful following. Some fans still appreciate the games, in a similar fashion to those who enjoy the more recent Tony Hawk titles, in spite of the plummeting review scores. In this case, visuals aren't everything. And the handling doesn't need to be on par with say Need for Speed for this sort of arcade racer to entertain. But it's still not enough. The car physics in Carmageddon: Max Damage are simply not nice, and it means lots of frustration. Imagine blowing the tires of a big family car in GTA, dip it in oil, and then try and escape the police. That's what it's like driving the vehicles on offer in Carmageddon, and this pretty much negates the fun that the concept offers. It should be mentioned that this frustration was mainly evident during our first five hours of playing the game, and after that it got better. Perhaps as our skills evolved. Perhaps thanks to the upgrades to the ride. But as a whole, the car physics simply don't hold up.

Back to the race, where after having splattered both bikini clad ladies and a bunch of cows we found further down the road, we've got plenty of time to spare and our attention is turned to the three ways in which you can win. You can get from start to finish, but you'll also need to pass a bunch of checkpoints as the layout is completely open. You can also dispatch your opponents until you're the last one left driving. Or you could challenge yourself by trying to harvest every single human and animal on the map. We've tried this a couple of times, but we soon grew tired of it and instead made our way across the finish line.

Those are the rules of "Classic Carma", and there is a total of six game modes to find here. Among our favourites are "Ped Chase" where specific pedestrians need to be taken out. "Fox 'n' Hounds", is another, and it's basically vehicular tag. One positive thing to note is that the five opponents really add to the bizarre nature of the game. If we were to simply forget about the race and simply explore the map they will follow after and completely destroy you. But in the longrun this doesn't really add to the enjoyment. Several times we got stuck between a wall and three completely insane drivers who constantly rammed us into a state of boredom. No-one is damaged, everyone is stuck, and this carries on until we've had enough and hit the reset to teleport back on the road.

Our murderous expedition continues. The crazed competition continued to chase our behind as if our rear bumper was the last one in the world. We approached a slightly more shady neighbourhood and a foolish deceleration had the enemy hit us up the backside and sent us flying through a great door. We'd entered the questionable club called "Saggy Maggies". A strip club that in addition to ladies also offered dancing penguins and bovine shakers. Whatever floats your boat, but of course they all ended up smeared across our bumper. Oops!

That there is a total of 63 race and carnage activities to complete in the career mode is naturally a plus, and Carmageddon: Max Damage ends up being rather generous in terms of content. Local multiplayer, however, is something that is sorely missed, but at least there's the option to play online. We didn't find much competition while playing for this review, but at least the feature is there. The lack of no local multiplayer was still disappointing, however.

As much time as we spent bumping into other cars during mile long races, there's also arena-based combat in the "Car Crusher" mode. Put simply, you need to turn the other cars into scrap by using the power-ups you pick up from barrels spread around the arena. Here it becomes even more evident how poorly the cars control, and we often had to pause the action to vent our frustrations.

The absence of decent tunes, the outdated graphics, and the lack of any sort of narrative is clearly disappointing, but it's the sub-par handling and non-existant car physics that cause the most damage to Carmagaddon: Max Damage at the end of the day. The developers Stainless Games should try and do something about the lack of friction with a patch, but as it is we won't return and spend more time behind this particular wheel. It's a shame because it has its moments. These moments, however, are too far apart and too fleeting for Carmageddon: Max Damage to end up as anything other than distinctly average.

Advertisements
Gamereactor UK
+
Gory splatter, Violent opponents, Plenty to do in the career mode.
-
Catastrophic car physics, Frustrating mechanics, Outdated graphics, No local multiplayer.
is our network score. What's yours? The network score is the average of every country's score

"It's the sub-par handling and non-existant car physics that cause the most damage."

In celebration of the fact that the game has found a global publisher.

Carmageddon: Max Damage races to PS4 and Xbox One 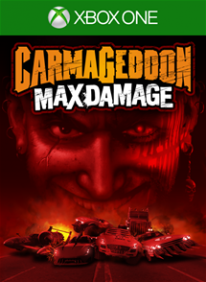