With FIFA and PES monopolising the football genre for years on end, it's nice to have something different to try, and that's precisely what Captain Tsubasa: Rise of New Champions offers: something different. At its core, it's a football game, but as you might expect, it is far from being a sports sim. Rise of New Champions has arcade gameplay, is packed with special moves like those seen in the popular animé, but it's not exactly a proper arcade football game either.

In fact, if you are used to PES or FIFA, it is likely that you will need some time to adapt to Captain Tsubasa: Rise of New Champions, especially as there are surprising similarities in terms of controls. You can perform short passes with X/A, long balls and crosses with Circle/B, through passes with Triangle/Y, shots with Square/X, sprint with R1/RB, and dribble with R2/RT. As you can see, very similar to FIFA and PES, and yes, you can change the configuration.

The camera is also lateral, and there's even a mini-map with the location of the players, which further brings Rise of the New Champions closer to the two simulators. You can even change tactics to reinforce the midfield, adopt a more offensive or defensive stance, and play on the counter-attack, for example. So far, it's just like a football simulator, but only so far.

Each player in Rise of New Champions has his attributes divided between dribbling, speed, shot, and other similar characteristics, but more importantly, they have special abilities. Some players are able to execute ultra-powerful shots, while others can block any attack, and even goalkeepers have access to "super defenses" that prevent any shots from entering the goal.

In fact, Rise of the New Champions works a lot like a rock/paper/scissors game, in the sense that certain movements cancel others out. For example, if the attacker and the defender press the same dribbling buttons (R1/RB or R2/RT), the defender will tackle the ball. However, if they press different buttons, the striker will automatically go passed the opponent.

All the player's actions eat up a "spirit" bar, which is required to perform special moves. This bar fills up automatically during the match and is essential for winning games. In Rise of the New Champions, there is little point in isolating a player, because the odds are very high that the goalkeeper will block the shot, even at close range. What the player needs to do is to continue to shoot at the goal, as each defence depletes a little bit of the goalkeeper's spirit bar. If that bar runs out, the next shot has a good chance of going in, especially if it is a special shot.

To perform these special shots you will need to hold the shot button down for a few seconds, but that's not as easy as it sounds, as you will be open to tackles while you prepare to make your move. In this sense, it is important to ensure that you can create situations in which your player will be free long enough to prepare the shot, either with passes or via dribbling.

That said, special shots are not necessarily a guaranteed goal, as there are some ways to stop them. Some defenders have the ability to block shots in a special way, as long as they have at least half their spirit bar. For that, they need to be somewhat in front of the opponent while he prepares the shot. As for goalkeepers, they have a better chance of catching these shots if they have a good spirit bar, but if they activate their "super defense" then they will definitely stop the shot. For that, however, you need to have a full V-Zone bar.

Each team has a V-Zone bar, which fills according to their actions in the game. When that bar is full, you can activate the V-Zone, which gives your players greater speed, fills the spirit bars faster, and gives you special benefits depending on your team captain. And as we mentioned above, they also allow the goalkeeper to make a 'super defense', although that completely depletes the V-Zone bar.

For all these reasons, it's impossible to play Rise of New Champions as a conventional football game, although the controls may initially suggest that it is possible. It's a strange mix, to be honest, between gameplay that at first glance looks like that of a traditional football game, but with special moves that seem taken out of a fighting game. Also curious is the fact that the game, even with all these elements, gets a lot closer to a real football match than the series has ever done.

But it works, and it's fun, respecting the characteristics of the show. I like the fact that it's not just a game that focuses on special moves, and that there are ways to counter these elements. And then there are advanced techniques to perfect, like air balls, special tag moves, and duels in which you have to press buttons quickly to keep or win the ball.

As you might have guessed, Captain Tsubasa: Rise of New Champions is not just about gameplay. There are two story campaigns to experience in the game: the one you already know from the animé, following Tsubasa, and a New Hero campaign, where you will take your own created player on his journey. In the two campaigns you will observe several story moments, with lots of dialogue, and even with scripted moments during the matches (some even have special hidden conditions that aim to recreate events in the series). In the New Hero campaign, however, you will have more choices in terms of narrative than in the Tsubasa campaign, which follows a more linear path. Throughout the campaign, you will also unlock short videos, featuring images from the show that provide extra context about the past of Tsubasa and other characters.

In addition to the campaigns, Captain Tsubasa: Rise of New Champions also includes local and online versus modes, and a practice mode that allows you to learn all the particularities of the game and conduct free training matches. But then we have another factor, which is the card packs. In these packages, you can find training and friendship cards, which allow you to reinforce the characteristics of the players or their connection with others. If you receive duplicate cards, you will get an improved version of that card. To buy these packages you will need "PP", which is the game currency. Now, what we are not sure about is whether these PPs can be purchased with real money or not, since there is no indication of that in the game, but we will remain on the lockout post-launch.

A word still for the editing mode, which allows you to choose the match ball, change kits, alternate special movements, and even select new celebrations.

Captain Tsubasa: Rise of New Champions doesn't work as a pure football game, even in arcade terms, but it works as a football game based on the Tsubasa animé. If you're a mere football fan that has no particular interest in the show, we don't think it's strong enough to warrant an investment, but if you're a Tsubasa fan and would like to relive the story with a controller in your hand - and even experience a new campaign - then it becomes a lot easier to give it a recommendation.

Advertisements
Gamereactor UK
+
Two story campaigns, one of them original. Gameplay manages to recreates the elements of the animé, without being too scripted.
-
The way the gameplay works, prevents Rise of New Champions from functioning as a proper football game. There's no English voices, only Japanese.
is our network score. What's yours? The network score is the average of every country's score

Captain Tsubasa is kicking off today at 3pm on GR Live

With Rise of New Champions imminent, we're able to show you the start of the game.

Captain Tsubasa to kick off in August

The Legends Edition will even include an actual fussball table.

The rival champions have been shown ahead of Captain Tsubasa: Rise of New Champions' release.

The football franchise is back with another game, and Bandai Namco has provided a brand new trailer too. 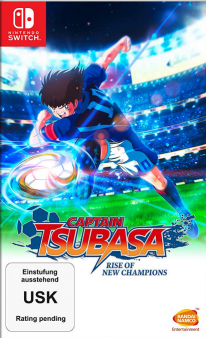