Nintendo seems intent on recycling the strong first-party titles that were originally released on Wii U, bringing them to the Nintendo Switch, and it's easy to see why. Their previous console had lots of quality software, but only a fraction of the potential audience on Switch ever got to experience it, so why not bring these experiences back for a second time? We've already gotten a few great games, like Mario Kart 8 Deluxe and Donkey Kong Country: Tropical Freeze, and we still wait in hope for the likes of Super Mario 3D Land and Pikmin 3.

The honourable Captain Toad, who got his own adventure in the shape of Captain Toad: Treasure Tracker back in 2014, starred in one of the lesser known first-party titles for the Wii U, but it's easy to see that the game is a perfect fit for a handheld (or hybrid, if you will) such as the Switch. The levels are small, even tiny, and have been designed for short, enjoyable play sessions. Accessibility and versatility are at the core of this experience.

Now it's heading to Switch (as well as 3DS), and it comes with new exciting Super Mario Odyssey themed content and somewhat superfluous co-op. In order words, it's business as usual, as Nintendo brings over another Wii U title. We're not complaining, though, as Captain Toad deserves a larger audience and, hopefully, he'll find one on the Switch.

You can read our old review of the Wii U title here, but if you haven't and you never got to try it back in 2014, don't worry as this is a game that can be enjoyed by anyone, and that's not just a marketing line here, Captain Toad is truly a shining example of accessibility. Each level is made out of a section of the world seen from a specific angle and you then you manipulate the perspective in order to discover both secrets and new routes for Toad. It's a puzzle game where you need to rotate and get Toad in the right place at the right time in order to progress.

Each level offers coins to collect, three hidden gems to find, gentle platforming sections, and something you'd be hard-pressed to call enemy encounters. Toad is rather simplistic, at least for a long while, and while he comes across traditional enemies such as Shy Guys, Koopa Troopas, and Bullet Bills, they are most often easily overcome. The enemies in the levels are perhaps more akin to pieces of a puzzle, and it's more a case of getting Toad in the right spot at the right time. It might sound a bit mundane, and in a way it is, as Toad himself doesn't really offer any abilities apart from pulling levers and collecting coins.

But there is something to be said about limitations and what they bring. As is the case with Nintendo games, in general, the lack of mechanics isn't a drawback and you'll get more and more into the game with each level. There's something engaging about this change of pace as we switch from the more core-oriented experiences Nintendo has served up recently.

It's worth underlining the fact that you shouldn't expect the sort of depth, whether in terms of mechanics or design, that you'd find in Donkey Kong Country: Tropical Freeze or Super Mario Odyssey. That's not the point here, but simplicity can also sometimes be the cause of frustration. You might find yourself looking at Toad thinking 'why isn't there more to you?'. The Captain is more or less a spectator rather than a protagonist, and it takes some getting used to, especially if you're an older gamer who has grown used to what Nintendo games tend to offer.

Thankfully this also makes way for something more positive. The focus shifts from the main character to the surroundings, something that's not always true elsewhere. We've all sprinted through a gorgeous hand-drawn level in a game like Rayman Legends, our full attention on the actions of our chosen character, halting right at the end and realising we never paid attention that what was right in front of our eyes. That's what Captain Toad does really well. The game is completely focused on the environments, not just manipulating them in order to progress, but also simply admiring them. While you turn the level around you will notice just how much detail there is in every single one of them. It's an amazing experience and something we'd love for Nintendo to explore further in the future.

It's also helped by the fact that Captain Toad: Treasure Tracker is easy on the eyes. The size of the levels has allowed Nintendo to really pour it on with beautiful aesthetics, flowing animations, and delightful colours. Whether you're exploring a haunted house, crashing a Goomba pool party, or whatever it may be, it's a pleasure to behold these levels. We did notice that the game gets a bit blurry in handheld mode, and Nintendo has had to turn down the level of detail to make it work. It's pretty obvious and a shame, of course.

There is, however, some new content to feast on here. There are new levels based on New Donk City from Super Mario Odyssey. They are rather pretty, and getting to see New Donk City again can never be a bad thing. Nintendo has also, and this is something rather uncommon for a re-release, removed the content that was based on Super Mario 3D Land. You could argue that this content is replaced by the more current Super Mario Odyssey levels, but another way to look at it is to say that it's now incomplete. The game also offers co-op, but much like in Super Mario Odyssey it's more that the second player offers his or her assistance by turning knobs or decapacitating enemies.

Thankfully, these minor flaws don't make Captain Toad: Treasure Tracker less of an experience. Some may think that the game lacks a bit of player input, and while some new content has been added, some has also been removed for this release. All the same, Captain Toad is a colourful, charming, beautiful and relaxing experience, and here's hoping Nintendo continues along this path and delivers a fully fledged sequel in a couple of years. 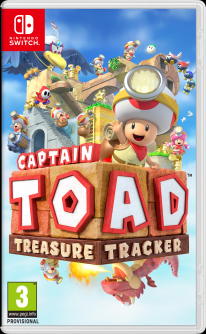