That voice belongs to the worn-out dust-covered cowboy that is you. Told entirely in flashback, your character's weighing up a lifetime of sin in a saloon bar and recounting his years amongst some of the West's most famous names to bar patroons.

The storytelling device allowing Techland to skip years and settings in easy manner, offering a variety of gameplay elements and faces in quick order. For today we're getting a short fifteen minute guided tour round a farmhouse and a shootout alongside Billy the Kid (a grizzled veteran dressed as vibrantly as a pantomime cowboy and introduced via comic book panel cut-scenes) which debuts, or reintroduces, gameplay mechanics.

A fairly light HUD keeps three consistent elements: a pistol icon in the top left corner of the screen, a pair of dice top right, and your bullet count by your chosen weapon. First is your Concentration Mode charge, slow-mo that paints targets in red. The dice are for Sense of Death, another slow-mo special ability that gives you a last-second chance to dodge a bullet with a tap of the left stick that'd otherwise kill you.

There's also skill trees buried in the backend, gradually unlocked through experience points, and split between the likes of offensive approaches (gunslinger with perks like faster reloads), and more long-range strategies with the Ranger speciality.

There's the distinct arcade shooter styling to proceedings other than the light touch of the cel-shading paint job. Big chunky text pops up to mark every kill, and while its a first-person shooter, the demo's setup means multiple moments when the studio's sniping at charging killers from behind barrels, atop water towers or from first floor windows. That, coupled with one liners that skirt cliché with script and delivery, and there's the whiff of Mad Dog McCree here.

A tone reenforced by the voice work of the narrator. This is early days, its stressed, the demo only an alpha build and the game not due until well into 2013, but the voice doesn't fire the imagination in the way that we've seen with the likes of Bastion, or even modern Western titles.

Yet there's cute tricks abound though. Patrons will butt in during the retelling to ask for more details, or question others. The narrator approximates the voice of whatever famous name he's currently talking to (Butch Cassidy and Jesse James are but some of the figures appearing in the game), which both aids in outlining mission objectives and reinforcing that this entire account is through the eye of the beholder.

That last point alone intrigues. There's the possibility that the narrator's oral account to his listeners and what we're playing could diverge. With the studio dabbling in different perspectives throughout the series, there's potential for this being much more than a clear-cut Western tale.

Because there's no such thing as a clear-cut story from the Old West. Legends are built on a chewed-up mix of the real, the elaborated and straight-up lies. We're really hoping that amid the arcade thrills of a shooter (and whatever other modes Techland fit into the game. We know Duels will play in some capacity) the studio brings that level of ambiguity to the forefront during our time with the Gunslinger.

"The six hour long adventure is just the right size for a digital treat, and Gunslinger is somewhat liberating in its old school approach."

After plenty of speculation, the game has been confirmed at long last, landing this December.

Is Call of Juarez: Gunslinger coming to Nintendo Switch?

Techland is teasing an old west-related announcement coming next week which has speculations going around regarding a Call of Juarez reveal.

The ESRB site lists it plain and clear for Nintendo's console, so it looks like the 2013 game will return.

Techland teases something to do with Call of Juarez

It seems that there IS room in this town for two western games.

Call of Juarez rights have reverted back to Techland

Polish developer publisher delivers official word as Gunslinger is back on Steam.

As the game sees release today we've dug up a quick interview to get you in the mood for this gunfight. 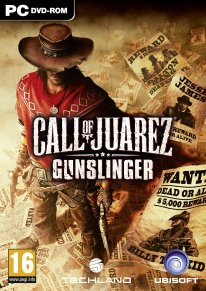