Call of Juarez was a great western. Not so much because of the gameplay experience it provided, but thanks to the wonderful story about the raving mad Reverend Ray and the wrongly accused Billy as they travelled across the South. There was no safety to be had as Ray appeared with his revolver and his good book giving you one last sermon with he put a smoking hole in your head.

It may have been a great story, but the game had plenty of flaws. The level design felt stuck in the trappings of the previous generation and there was little fluidity to the gameplay. This is something developers Techland have take to heart and in the sequel there are larger areas to roam, more options in terms of tactics, and there is a sense of an invisible hand guiding you across a seemingly open landscape. It's an illusion, but it's one I gladly believe in.

The first game never really made a big mark, and perhaps that is why Techland have chosen to reboot the franchise with Bound in Blood. It's more of a prequel or prologue as the wimpy Billy has been replace a real macho in the shape of Thomas McCall, the brother of Reverend Ray.

Unlike the first game where you were forced to play as one of the characters in each level, you are given the choice of who to control in most levels of Bound in Blood. Choose the character who fits your style the best, and attack the levels the way you want to.

That brings us to the most important question of all. How good is Call of Juarez: Bound in Blood? The answer: It's great. It begins at the tail end of the American Civil War as the South are being pushed back. For once you are on the losing side in a game as you wear the grey uniform trying to fend of the Northern assault. A nice change of perspective.

What we are given is a fresh story that doesn't fit into the typical hero's journey mould. A couple of farm boys fighting for their way of life against a power far greater that plunders, steals, rapes and destroys everything. As the brothers realise that all is lost and that there is no point trying to hold of the North they desert from the army.

The task of rebuilding the ravaged family grounds and re-establish the family name is a breath taking story that takes the brothers throughout the war torn South. It may sound weird to talk about the authenticity of a Poiish Western, but that is the feeling that fills me. And even though the game is smack full of clichés and stereotypes, it never crosses the line and becomes parody.

Unfortunately nothing has been done to remedy the slightly stiff controls of the first game. Sometimes it feels like two hands carrying revolvers have been mounted on a tank rather than being attached to a living breathing human body.Walking around with your arms like the McCall brothers has a primitive feeling to it and I wonder what their wrists are made of (something durable I suppose). A bit more lively animations would certainly not have hurt and this also goes for the section that involves horses.

Apart from the animations it has to be said that the latest iteration of Techland's Chrome engine impresses. This is especially true when it comes to the dense wooded areas. The desert landscapes are very detailed and vast, as they look like they're scorching hot and makes you stretch for something to cleanse your thirst. Things like villages and settlements are also very well depicted with only the lacklustre animations holding back a better graphics grade.

I have a hard time imagining that Bound in Blood would ever become a multiplayer phenomenon to rival something like Halo or Modern Warfare. It is a well known fact that these games attracts hordes of players every week while its hard to find decent competition elsewhere. That said Bound in Blood has plenty of fresh ideas and a great multiplayer component, hopefully it will attract a steady following of fans.

What I appreciate most that we are given 13 classes, everything from gun men, to miners, weapon smiths and Indians, to play with. Each class has their own advantages and disadvantages as well as unique weapons. You can upgrade each class after winning matches. I always enjoy regular death matches the most when it comes to multiplayer modes, and I'm sometimes annoyed when things aren't kept simple. In Bound in Blood the death matches are called Shoot-Out, and you are given a wanted rating that rises as you kill your opponents. With your wanted level comes more attention, and you are going to have to adjust your tactics to your wanted level. A nice system that evens things out and makes things more exciting.

If you are looking for things to complain about then eight maps provided aren't as many as in some other games. But such are the times and we can probably count on more being made available as downloadable content later.There are five different game modes, though I'm concentrating on death matches (sorry, Shoot-Out), but I also found Wild West Legends entertaining where you are given the task of either protecting a bank or rob it.

Call of Juarez: Bound in Blood is not the perfect Western game. But it is an unusually dirty, and violent action game that gets its colours from the beautifully told story rather than gory graphics. Just the fact that you own an estate complete with slaves, but somehow still get to be a hero is a fresh take that forces the player to think just a tad bit more than what he or she is used to. The controls leave a bit to be desired, although they are an improvement on the original, but top notch level design and varied environments along with the detailed visuals makes Call of Juarez: Bound in Blood a slightly surprising summer hit.

Screens and a new trailer

Techland back with Call of Juarez: Bound in Blood 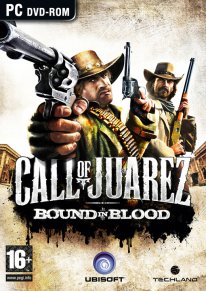