It's hardly an easy torch to grab. It's slick, it's heavy and it was more thrown than actually passed. When Modern Warfare-developer Infinity Ward got into trouble, Activision gave Treyarch the next big task. Treyarch have so far produced the not-so-impressive Call of Duty 3 and Call of Duty: World at War, but with Call of Duty: Black Ops they show that they are much better than that and produce a shooter that's just as good as Modern Warfare 2 and has the potential to become the best this year.

I can start off by saying that all Modern Warfare 2 vets will feel comfortable in their new Black Ops-clothing. The shifts in tempo, the scripted sequences and the whole feel of the game reveals that the new developers have thrown more than one look at Infinity Ward's game. But compared to that game, I'm struck by how much bigger focus there is on the story this time around.

We're in the Cold War, Castro is being his most aggressive self and the story is not told through shaking satellite images and windows of dialogue. Here we get flashbacks, monologues and an especially fresh twist towards the end. Not Oscar-material, of course, but Treyarch offers up a nice piece of mystery. Hardly very original, but a lot better than previous Call of Duty-games.

During the singleplayer campaign we're given a tour through a Russian detention camp, the wet jungles of Vietnam and a shop stuck in the ice of Antarctica. Amongst other things. There's hardly anything wrong the variety of environments, and the same can be said for the gameplay - intense shootouts on big battlefields is broken up by crawling through claustrophobic mines and spiced up by helicopter flights and controlling UAV-planes.

An especially memorable sequence sees you guiding a group of soldiers through a wasteland, filled with armed Russians, from your eye in the sky. When the group is spotted your thrown into the first person perspective and have to shoot your way to safety, and once again the camera zooms out to the the perspective of the heat sensitive camera on the belly of the circling planes. This use of perspectives are definitely exciting, especially when they are mixed as fast as they are here.

Sequences like these defines the overall Black Ops experience. It's all done for the player - i.e. no freedom to speak off - but the developers have felt that tailoring the action like this has just as much potential for entertainment as the one the player creates him/herself. When you're attacked by a crazed Viet Cong, and have the press the X-button like your life depended on it, it's doesn't make it any easier knowing it will happen again the next time you play through the same level. To play Black Ops is to play an action film, where the hero always manages to escape death with only the tiniest of margins.

Compared to Medal of Honor, the entertainment comes at the price of realism, which is far from a negative thing. The amount of brutality in the game's scripted close combat and execution attacks is something that I could have been without though. Black Ops is a tight action game and I don't need close ups of knives going into throats to feel something. These scenes are far and few between so one can accuse them of being there just for shock value, but they can luckily turn them off at the start of the game (which more or less no one ever will do).

For the stressed player, it might get a bit frustrated to constantly have to care about your team mates. Now I'm usually pretty good at following the leader, but I still managed to get ahead of myself a couple of times. Which means I had to run back to my AI-partners that were still busy firing at some hidden enemy somewhere. Those kind of breaks in the narrative flow don't happen very often, but become glaringly obvious when they do. I guess that's another price you have to pay when you do an action game this way.

Since Call of Duty: Modern Warfare was released, the series' multiplayer has become a much more important part of the game experience for most people. And despite the fact that I personally never played by way to Prestige, I can without a doubt say that Black Ops has expanded and improved on the multiplayer-part. A lot of this lies with the new currency system, where the player can buy new equipment without necessarily having reached a very high level.

Combine this with the new Wager-mode, and Black Ops rehabilitation centers will see a lot of business in the future. Here you can bet smaller och bigger wagers into a pot, and after a fight the three players that come out on top will split the money. It's hardly something for players with low self-esteem, but if you take part in it the competition will be more intense than Zac Efron's iris (What? - Editor's comment).

I also think that Gun Game should be mentioned, which might become as big a hit here as it was in Counter Strike: Source. You get a better weapon for each kill you score, and it's all a race to get to weapon number 20. And if classic competitive modes aren't your thing, Treyarch has included a new version of the popular zombie mode from World at War. Hardly a Left 4 Dead-killer, but still a mode that can keep you occupied for hours.

Too good to be true? With Call of Duty: Black Ops, Treyarch is to Infinity Ward like the cool guy in school is to the older kids he tries to emulate. With enough work, he will finally be accepted and be part of the gang. Black Ops takes what used to be good with the old games, tweaks it a bit and improves on the game balance without messing it up.

The singleplayer-mode offers a thrilling storyline, the multiplayer introduces currency and the directing is tighter than a pair of tight jeans in a rainstorm. Bravo!

Gamereactor UK
+
Super tight direction in the singleplayer campaign, exciting storyline with a lot of variation, the currency system and Wagers in multiplayer, improved zombie killing
-
A bit cheap shock value at times, some bad artificial intelligence
is our network score. What's yours? The network score is the average of every country's score

REVIEW. Written by Daniel Guanio (Gamereactor Norway) on the 9th of November 2010 at 08

Activision rakes in the money.

Check out the new trailer.

Compete with your clan.

Yes, the game has been out for ages. 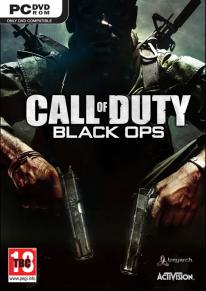