Burnout Paradise Remastered is heading to the Switch later this year, EA confirmed today during Nintendo's latest Direct broadcast. We're promised that the port will be "fully optimised and enhanced" with a steady 60 frames-per-second, and naturally, it will include all of the additional content that has been added to the game previously, including Big Surf Island.

Exactly when Switch-owning race fans will get their mitts on Burnout Paradise Remastered remains to be confirmed, but we'll let you know as soon as the information appears over the horizon.

"It isn't the 4K marvel we perhaps hoped for, but it's still an immensely fun and chaotic racer packed full of cars, events and side activities."

Burnout Paradise Remastered is heading to the Switch

As revealed during today's Direct, the remastered version of Burnout Paradise is heading to Nintendo's hybrid console.

The game is in pole position ahead of Kirby.

"Where the grass is green and the girls are pretty!"

No microtransactions in Burnout Paradise Remastered

After much speculation, EA has confirmed its first remaster of this console generation. 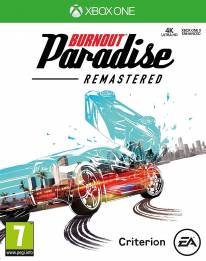