We don't know a lot about Young Horses' upcoming game Bugsnax, but the short announcement trailer and the theme that accompanied it at the PlayStation 5 event earlier this year had the world intrigued and delighted. The game will have players solve the mysteries of Snaktooth Island, an island on which bugs are snack foods and become part of the body of those eating them - it's a lot, we know, but boy is it intriguing.

The theme of the game, titled 'It's Bugsnax!' has become an adorable phenomenon and the full song is now available (find it on Spotify here) and not only that - the song by Kero Kero Bonito is being released with Young Horses on iam8bit in 7'' vinyl single form for $11.99 and it's looking pretty darn cute with its strawberry vinyl art and scratch-n-sniff jacket. Check it out below. 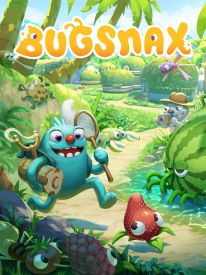