I was a little surprised at first. Only £6.69 for Bright Memory, a game that in advance looked really nice and seemed a bit like a poor man's Doom Eternal. But, you usually get what you pay for and Bright Memory is essentially only the first part of Bright Memory: Infinite, which will be released next year.

This means that it is a very short adventure that awaits you - and I'm actually not that sorry about that, as I really did not want more of it. Mainly because this was launched for PC last year, and I have probably never seen a more obvious PC conversion in my entire life. Here you will find a small batch of PC settings, where several are also turned off or set too low. It includes V-sync which gives unpleasant flicker until you start this, after which the problems disappear.

I do not want to be too whiny about the technical details, as the game is actually developed by a single person. And seen in that light, it's a minor masterpiece, but it does not help me. Well, with this settled, so how's the game really? That I have to tinker with the settings does not matter if it is a masterpiece that awaits me.

Without any thrills and with a seemingly rather poor translation, I am thrown into the role of Shelia. Exactly who she is and what the overall goal for her is feels a bit unclear. But she is quite well designed and has a couple of nice tricks to do that make me still like her. Until I start playing, that is. Because it is immediately noticeable that something is very wrong. It turns out that the developer FYQD has given both X- and Y-joints the same speed (probably only WASD from the keyboard transferred to both analog sticks), and that this is something that can not be changed. I had to make Shelia much, much slower to be able to make it work.

She also has a sideways dash to use for quick moves, which is quite handy, but unfortunately, often ends up with me aimlessly throwing myself into things or performing unwanted, suicidal leaps off edges towards an immediate death. The combat system is otherwise the best Bright Memory has to offer because it provides the opportunity to really outshine the enemies through fast button combinations and what can best be compared to air-juggles in fighting games.

But just because it's the best, does not mean it's fun in this game. The enemies are either too easy or they are bullet spongy bosses who eat some insane damage and chew hot lead as if it were Muesli in a way that it is reminiscent of the latest Serious Sam. The fighting goes on for so long against bosses that I get tired of all the action. There are also a few new abilities to unlock in a very limited level system, but overall it is so meager that it adds nothing.

So there is nothing I really appreciate about this then? Well, I actually think the presentation and design are good. I find myself sitting wishing that there was a better game under the surface, as the design is great. In addition, the music is reminiscent of the late 80's anime openings, which still makes my manga heart soften a bit. And no matter how awful it is to say, I appreciate that it's short. It took me about 30-40 minutes to play through this, and I really would not have wanted more of this when so much other fun awaits me this fall.

Next year comes the complete package with Bright Memory: Infinite. Whether the developer has time to improve this and build something more console-adapted and nutritious remains to be seen. However, I would not hope for that, as the guy who makes the game is, as I said, alone and a lot of work remains.

We check out the Chinese one-man project Bright Memory to see if it has anything to offer next-gen gamers.

The FPS is one of the more overlooked titles within the Xbox Series launch line-up.

Bright Memory will be released on Xbox Series consoles, November 10

Another title sets its sights for the launch of the Xbox Series.

We got to play FYQD Personal Studio's shooter, and try the weapons and abilities out for ourselves. 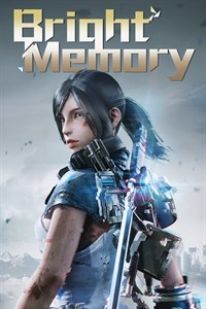