Last month at Fun & Serious Game Festival in Bilbao Gamereactor had the pleasure to talk to Bizkaia Award Brenda Romero, who is currently working on a new, secret game, at Romero Games in Ireland.

In the interview below we asked the game designer which was her favourite, or perhaps the game changer, of the 40+ titles she's worked on during her career.

"Probably I have to say Train", she says referring to a game changer. "Which is one of the analogue games that I made which, at the time, did something no other games did. If you look at other forms of media, it was basically just a documentary game, but at the time nobody was making games that way".

However, "the favourite game I have to say, I hate to do this, but [is] the game I'm working on now, and the team I'm working with now", she admits, even though it's still a very secret project. "We're just having a lot of fun, everybody's ridiculously talented, they've been making games for a long time, we're working with a publisher that I really like... and I wish I could tell you everything about it, but this is the game that I wanted to make for probably 20 years - it maybe even longer. Certainly, at least 20 years, so I'm really excited to be able to make this game. We've got just a couple new systems, we're just in front of a big milestone, so seeing it coming together, ah it feels so great!"

"My hope is that we actually announce it in 2019", Brenda adds when asked if there's anything more she could share. "And not late 2019 either. I don't think the game will surprise anybody, that is 'oh, ok, bring to me that, yeah I can totally see that', but that's about all I can say, and it'll be on multiple platforms. I'm sorry, I wish I could say more".

In the full interview, Brenda Romero talks about RPG, Romero Games studio, or the role women and Irish studios have in the industry. What do you think Brenda Romero's next game will be about? Leave a comment below.

Load your Tommy gun and get ready to make your mark on 1920s Chicago.

Empire of Sin hits all current-gen platforms this December

Paradox opens up its pre-order purse.

Mafia tactics game Empire of Sin held back until autumn

Romero Games' Prohibition-era strategy title is being held behind bars until it has well and truly learned its lesson.

Brenda Romero on board game design influencing Empire of Sin

The team even held a sort of "pseudo-D&D session" when coming up with the ideas for a game in 1920s Chicago. 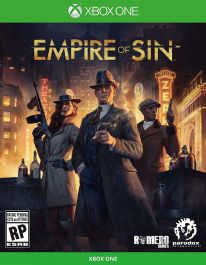