Considering how well Bravely Default did, both amongst critics and sales wise, the sequel Bravely Second: End Layer was expected. But Nintendo have refused to announce it for release outside of Japan - until now.

Unlike the Japanese, we won't get to enjoy the game until next year, but as long as we get to play it, that's fine with us. It is still a Nintendo 3DS exclusive and we really have no more exact release date than 2016. We expect learn more about it at E3. 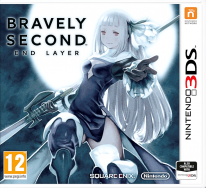