We haven't written about Spiders Games (Mars: War Logs) next game, Bound by Flame, yet and we needed to correct this oversight as the game is now confirmed on PS4 in addition to the previously announced platforms PC, PS3 and Xbox 360. The game is currently planned for release early in 2014.

The main character in the game is possessed by a flame demon and this allows him use of terrifying demon powers, however, they come at the cost of his human soul and players will have to make some difficult choices along the way.

During Gamescom we filmed an interview with GRTV on Bound by Flame that will be published in a not so distant future.

"In the end, and surprisingly after those first few hours, Spiders manages to deliver a compelling story; enough to raise our verdict a couple of notches from our original impression."

Join us from 3pm for our newest live show, as we explore Spiders Studio's action RPG.

The companions in Bound by Flame

Mage, Warrior, Witch, Elf and Undead will accompany you in Spiders' RPG.

Bound by Flame out on May 9

One of the first RPGs on PlayStation 4.

Bound by Flame - If you've got horns, no helmet

We chat with producer Walid Miled about a game of many beards. 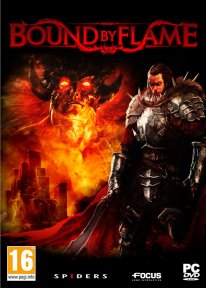