Yet Gearbox almost manage it. With a formula that remains nearly infallible most of the time you're treading your way across the vast wastelands of Pandora, it's rare for drudgery to set in. And for a game of this size and style, what's even more surprising is that the word "grind" never enters the lexicon of the mounting body count as you cut your way across the planet.

Borderlands 2 drops you into the vast wastelands of Pandora - multiple large-scale hub areas of differing climates interlocked by loading screens disguised as gates or fast-travel posts - as a gun-totting mercenary out for fortune and glory.

Most interaction with Borderlands denizens is by way of bullets. Every area's populated by a mixture of indigenous wildlife, psychotic gangs and hulking killer robots, run-ins with any and all potentially fatal.

Friendly outposts are few and far between, and also home to equally-psychotic individuals. Difference is, they see the worth in letting you help them as a weaponised problem solver. Which means collecting a heap of missions that casts you right back out onto the plains or into fortified strongholds to tick off objectives or die trying.

And therein lies the repetition, for no matter which way you put it, the majority of Borderlands 2 sees you chewing through energy bars and shields as efficiently as possible before your targets (the singular form of that word is rare indeed) do the same to you. There's only a handful of missions in fact, that don't see a bullet fired. And one of those is the saddest, awkward, and most wretched birthday party you'll ever see.

Yes, a birthday bash. While Borderlands 2 can't fully hide the simplicity of its mission frameworks, it has a ball in inventing increasingly stupid reasons for carrying each out. Such as luring a crazed killer into his stalker's home for a tea party. Setting a religious midget aflame in the jaws of a massive dragon boat so he can enter the next life. Or seeing how a zoologist's renaming of local wildlife sits, not by rolling it around on the tongue, but in context blasting a horde of them to buggery.

Gearbox does an exceedingly good job in selling these missions. While the personality of the main story mission strays into boring familiarity (yet another grassroots resistance combating an evil overlord) the personalities encountered throughout, and their objective handouts gives proceedings a variation that feels wholly unique (though the appearance of certain individuals will resonate more with those that have played the original).

Same with side-missions (even those listed as "inconsequential" on the menus). You pick them up with glee, and see them through because they're enjoyable. Never once did we enter into adding yet another waypoint onto the map with the thought to grind XP - its testament to the quality of the writing, voice-work, and enjoyment of the game mechanics that nothing in the game's feels forced, and that the sense of grinding never sets in because you're always engaged.

There are dips though. Early on (just as you're approaching the double figures for hours played), you start to tire of repeatedly running through the same camps, and tackling the same enemy types (gangs colour-coded differently but obviously shop at the same Henchmen store). Sanctuary, the main outpost for friendlies discovered early on, is near empty, with few NPCs and even fewer side-missions makes it unattractive to frequent, and seemingly a missed opportunity.

Repeatedly entering the same zones, by virtue of quests crisscrossing over the same areas, sees you stop exploring for the fun of it, presuming, rightly, another mission will lead you into locations you otherwise skirt during another quest thread.

And while the humour remains oddball and ever-amusing, you become numb after a while - you'd become immune to your favourite comedy show if you did a marathon session watching it. It's the same here, and even antagonist Handsome Jack's continuing transmissions over your intercom - this generation's way to build up a game's central villain - looses comedy traction for a while.

But this dip is only fleeting. The introduction of Hyperion troops coincides with the game changing gear again, and forgetting there was anything below sixth.

Handsome Jack's armoured army, the Hyperion soldiers get the best entry in the game. Its a sight that continues to dazzle (and thrill) throughout, as the robotic minions are fired from Jack's moon base, which remains constant in Pandora's skyline, plummeting like meteors from above and hammering into the ground around you.

Their appearance also sees Gearbox ramp up the idea of multi-sided conflicts that they'd only flirted with until then, and with the range of enemies and species expanding shortly after, (as well as Sanctuary issues being addressed) the onset of encounter tedium is wiped out completely as you're juggling weaponry and item buffs mid-fights to survive.

Because that's the other bullet in Gearbox's gun in firing a headshot to repetition. Even during that slight dip, you're still thinking, and tinkering, with your character's customisation.

Gearbox offers four classes out of the box, each with three skill trees to gradually unlock buffs, character upgrades, and class specialities that make for noticeable differences to your combat skills. Chaining melee attacks, bullet barrages, double turret deployments armed to the teeth...there's not a branch on any tree that doesn't entice.

If you're not having fun playing with it you're coveting it, and that there's always the option to completely re-spec your character at any point if you so wish means you're not consigned to a set play style, and smaller cast-wide buffs unlocked through "Badass" tokens (earning them a sideline the size of any other game's mission total with numerous challenges to tackle) can be carried across to any new class when you start the game again.

Of course the four have been designed to compliment each other, and Borderlands 2 is hooked up primarily for a foursome's adventure. However we spent the majority of our time going solo across Pandora, and while the game scales the challenge and the rewards for multiple adventurers, the title holds up under lone wolf scrutiny.

You can see larger killing areas have been built to incorporate multiple routes, sniping positions and defensible positions, but importantly even alone the battlefields feel tight, enjoyment coming from constantly needing evolving strategies to tackle threats that otherwise someone else would be responsible for.

And when in the midst of a good fight Borderlands 2 soars. A soundtrack that pumps harder than a heart tortured on a treadmill powers you through, and gunfire that roars in your ears makes every clip used an adrenaline-fuelled eulogy to bullets. Combine with multiple enemy types that require different techniques to down quickly and you loose all sense of the what and why and completely loose yourself in the moment - the game's affection for uncomplicated violence a boon rather than weakness.

And thanks to the game's randomised gun drops, you'll always be searching for the perfect firearm to accompany you, whilst simultaneously drawing you into a state of possession usually reserved for gun-nuts and stalkers.

It's compelling. Enemies will drop loot - ammo, cash, shield or grenade upgrades - but more importantly, guns. You can also find them in crates, or very the premium types, stashed in hiding spots around the world. Hover over any and a quick stat breakdown, with a comparison sheet from your current squeeze, will flash up on screen, and different gun makes will offer different bonuses or elemental damage.

Until you get your optimum setup, large parts of your time on Pandora will be spent foraging, testing out new additions on enemies, chucking some immediately, swearing fidelity to others...until you find a better upgrade. Then the cycle continues once more as you seek the perfect balance of arsenal.

To example: for several hours of game time, I held onto a trusty Jacob's revolver pistol. The damage it offered was decent, but its firing rate bonus turned me into a killing machine. the fire rate was as quick as I could pull the trigger, and soon I could unload six bullets in the blinking of an eye. I felt like a damn cowboy, and that gun saved me from more scrapes that I can count.

Few hours later I found an upgraded version, twenty points and change extra on the damage count. If your backpack's full (you can upgrade the size over the course of the game), you've the option of dropping unwanted gear to make room. I took the upgrade, but kept the older revolver too. Jettisoned a SMG. Trusty weapon, but bucked like a mule.

You can sell weapons, shields and the like at vending machines or vendors. The revolver stayed with me, until I got back to Sanctuary and stored it in my personal bank. It's still there. Some things have too many memories attached, and you can't let go. It's amazing how the game gets one of its central mechanics under the skin like that.

I think I've got a decent balance now. Two SMGs, one with electrified elemental damage for Hyperion troops, another standard for everything else. Two sniper rifles - one with Fire damage for flesh-based lifeforms, the other without for anything with Fire resist. A rocket launcher for emergencies (you'll be surprised at how much damage bosses can soak up), a grenade launcher for groups. And a trusty revolver, my very own "just in case".

Likely in a few hours, everything but that last will be cast out for even better versions, and as Pandora throws more strangeness at me, I'll have to adapt.

And that's the lynchpin of the whole operation. Even when you're not on Pandora, you're thinking about it. About how much a mini-nuke skill will level the battlefield (pun intended). That the perfect SMG must be out there somewhere. Who'd win between a mutated goliath and a thresher if you could just entice the two to trade blows? And also: how much a charismatic asshole can Handsome Jack continue to be?

By rights a shooter some sixty hours in length, and lacking the emotional depth of most RPGs, would have you burnt out. Yet whatever miracle formula Gearbox has entered into the foundations of Borderlands 2, it works, and equates to one hell of a party. The type that either alone or with friends, you'll have a blast at.

Advertisements
Gamereactor UK
+
+ Scripting is consistently superb. + Plenty of fun with the reasoning behind mission objectives. + Guns: gotta collect them all!
-
- dip in enjoyment early on. - Resistance Vs The Man already done to death,
is our network score. What's yours? The network score is the average of every country's score 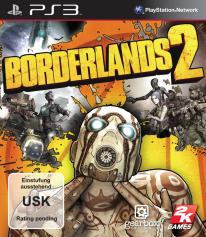