We're running full pelt towards a cliff edge, exiting a bandit stronghold after dancing through it in a frantic ballet of mini-engagements. A flock of motorised Buzzards, single-person attack helicopters, aggressively zoom just above our heads, pelting us and the ground around with gunfire.

We activate Decoy, a simulation version of our assassin Zero peeling off at an angle, weapon fire concentrating on that now for the five seconds we'll remain cloaked.

It's enough to get us to the edge and over, leaping into the valley below. We're already spinning in mid-air as we de-cloak, unloading into a lone Buzzard's pilot as one helicopter fills the entire screen as it soars towards us. The rig explodes, cartwheeling on past our head and smashing into the valley floor just before we land next to it. We pause only to filch some of the wreckage and we're off and running again.

It's one of those moments that's completely non-scripted (an increasing rarity these days), and makes you feel entirely convinced that you're in a futuristic cyberpunk wasteland where everyone and everything's either out to kill you or use you.

And the reason for this little self-generated set-piece? Getting the last ingredients for a thirteen year old girl's tea party.

Tiny Tina's quest line makes up the majority of our latest play of Borderlands 2. We've already picked up her date Sir Reginald from an overprotective mother (Sir Reginald a bottled bug, his mother a massive insect queen with a hive of killer children) grabbed guest Princess Fluffybutt (stuffed toy guarded by some gun-totting meanies) snagged crumpets (surprisingly just the tasty snack) and some Buzzard guts.

That last item on the shopping list is for part of the quest's climax. It's to fix a generator. A generator that's got electrodes. Electrodes that'll be strapped to Guest of Honor Flesh Stick. Stick will be systematically fried by Tina until cooked.

Flesh Stick is the name of a bandit from a camp across the valley who Tina's taken a shine to. Of course, it's us that has to flaunt ourselves to said camp and lead Flesh Stick on a merry chase into the clutches of Tina's mountainside lair. Once in and the party started, we act as security, stopping multiple waves of Stick's comrades, ranging from vicious midgets to heavies turned leaping berserkers when their (first) head is shot off, from mounting a rescue attempt.

Grabbing Stick is one of the odder escort missions, and in fact the entire day's endeavour is clear indicator that, first time through anyway, Borderlands 2's character, locations and enemies are diverse enough to mask the repetition that eventually sinks into fetch and escort quests. Gearbox has clearly put a lot of thought into making every element of the sequel as interesting as possible.

That extends to the upgrades: the three-tier Skill list offering meaty combat options no matter which branch you choose. We're shown the Game Changers, as the studio labels them; two big perks, one in the middle, the other at the end of each skill tier. These are the show stoppers, like Zero's melee dash that gets instant time bonus recharges for each kill, effectively letting you ninja your way through an entire horde of enemies. Or Salvador's "Come at Me Bro", which makes every enemy in the area focus attacks on him.

It's stuff that, broken down into its component parts, have the hallmarks of your typical MMO abilities; but they're presented here in such exciting and immediately gratifying ways that planning your future XP spend is akin to putting together your Christmas list.

Gearbox has also included a separate Badass points system, collectable tokens that can be redeemed for stat bonuses to gradually boost your character's baseline traits, and paired it with a new profile system that'll give you the option to carry those boosts over to your next character to start out ahead.

It's an impressive overhaul and we're already eager to get tinkering with the cast. We are however caught short on forming a better impression of Sanctuary, the huge town we're dropped into come the demo's start. As a frontier town meets fort it certainly looks the part, and there's an instance when the sky turns blood red come sunset that, coupled with Western-inspired guitar score literally stops us in our tracks to soak the scene in. But as we're restricted from engaging any NPCs due to time constraints (one meeting with Clap Trap aside) the stroll is a mostly a tepid affair.

Sanctuary [left] looks lovely, but we couldn't dig in to what it had to offer, while the jeep [right] we didn't get to play with at all. Next time!

But its the one slight downer on an otherwise captivating afternoon in the heart of the tundra. We'd rather tell you of about sniping the head off a heavy from a distance and watch as its berserker form runs rampage on its comrades, allowing us to mop up the leftovers. How we pause in a kill shot of a shielded enemy as we realise that shield is made up of tighly-bound midgets. Of how we stumble upon a powerful rifle that alters our chances of survival drastically during a nightmarish conflict and becomes our mainstay for the rest of our time. Or how we're saved last second from a lunging insectoid monster by a friendly sniper.

The spectacle, the humour, the personality is simply electric, crackling off the screen and threatening to char you. It's exactly what the stoic FPS establishment needs at this juncture as an out from yet another wave of military shooters. We're sold. Whether this love affair with its mechanics and characters can be sustained over the game's projected fifty-plus hour running time is an unknown, but for now we're nearly joy-puking in anticipation. 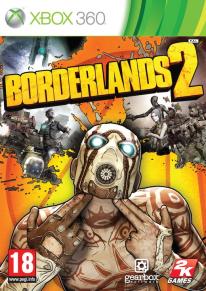