If you're considering buying Blur just to get a singleplayer racer, I wouldn't recommend it. This is without a doubt a multiplayer racing game, one which should be experienced online in mad races together with 19 other players. You want to play a crazy singleplayer racer, just go for Split/Second instead.

If I had been asked to review Blur for singleplayer only, the grade wouldn't have been pretty. It might just be me, but I can't make myself remotely care about winning cars from opponents. Sure, cool car. Why should I care? The entire tone of the Blur singleplayer is tiresome at best, it's just so disturbingly "cool" all the time. I'm not a very cool person and I can't even pretend that I am one when I'm racing make-believe characters, gaining fans and scoring lights (yes, that's what the game calls the points that unlock new tracks. I can't stand that name either).

In short, my first few hours with Blur were not very fun. I was annoyed most of the time, sighing and wishing I could go back to the madness that was Split/Second. I couldn't understand why people were hooked on this game. Then I booted up multiplayer instead. Many hours later, I realized that it was past midnight and that I had to get up to be in the GRTV studio early the next day. "Just one more race," I figured. Bad idea, since that one race became five.

Blur is a multiplayer game through and through. It's centered on community, on gaining levels and new cars by racing opponents online. It's easy to get into, it's hard to put down, and the beta that ran for a couple of months before the game launched allowed the developers to polish the whole experience to what is almost multiplayer perfection. The functionality is great, and some of the ideas are just so simple while being genius. It might be a small thing, but if you join a game room where a race is already in progress you can see a map of the track being played and the other players' positions on it; giving you a heads up when the next race will begin.

It's hard to describe the utter chaos that can be unleashed when 20 players go head to head on a racing track, armed to the teeth with the various Mario Kart-esque power ups that are scattered across the levels. There will be crashes, there will be low tricks to ram opponents into walls or over edges, there will be people modding their cars to make extra damage when they slam into the other racers. It's a glorious, and disturbingly fast, battlefield. And I'm hooked. There is a bunch of other multiplayer modes as well, including races only available to those of low level or a team based mode, but to me Blur comes into its own right when there is as many players as possible in a given game.

It's a highly competitive game, though. More fans, just another fancy word for experience points, are given out depending on what position you finish in. The more levels you gain, the more cars you unlock. Even during singleplayer you can challenge your friends to beat your time. The more interested you are in shaving off a few seconds of your records every time you play, the greater the lure of Blur. Some of this might turn people off, but I'd say Blur is good at capturing the minds and imaginations of casual gamers too - hey, I'm certainly a casual racing gamer.

But if you never play online, I'd tell you to stay away.

Advertisements
Gamereactor UK
+
Great multiplayer, tons of cars to unlock
-
Horrible singleplayer
is our network score. What's yours? The network score is the average of every country's score

Petter and Thomas tells us all about it!

Blur - Under the Hood

Blur beta open to all... 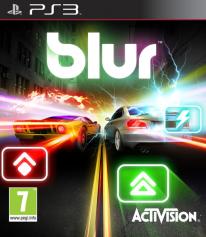