Last week we shared some fresh gameplay with you from Vampire: The Masquerade - Bloodlines 2, which we recorded at Gamescom in Cologne, and at the event we also caught up with Paradox Interactive's product manager Florian Schwarzer, who talked to us about where the sequel originally came from.

Schwarzer explains that the first title became a "cult hit thanks to its fans and their support. And now, thanks to a pitch by the original writer of the first Bloodlines, we are back, trying to recapture that lightning in a bottle."

We also asked about the individuals who made patches for the original game, who became heroes of the community when the first came out back in 2004, and whether Paradox has talked with them at all.

"We are talking to them, yes. In the end though, it has to be said [...] this is fundamentally Brian Mitsoda's story, and this is a game that's being built around that story by the team in Seattle."

As for what's coming in this game, Schwarzer continued:

Can Bloodlines 2 recapture the magic of the first? 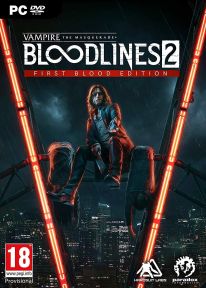