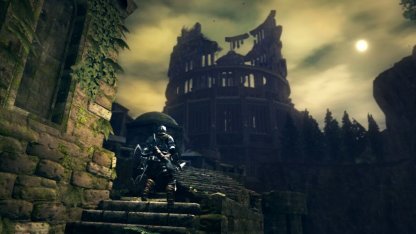 The flames are fading, the age of fire is nearing its end, and the abyss is ever growing. Darkness is approaching, and the gods and giants of anor londo are fleeing, soon the city will be all but abandoned.

It has not seemed like over night, no it has been almost 4 years since the first of the series Demon souls was released in Japan. Yet the developers did not expect it to become such a smash hit. They had not advertised for the game on any major scale, they were a relatively small company, and almost no one had heard of it outside Japan.
Then came the loyal fanbase, they spread the word better and more efficient than any commercial ever could.

Genre
It's an Action-RPG with online elements. Now that is not exactly anything revolutionizing in itself. But what is so amazing about it is that its hard, and I mean HARD but not in a way which will make you annoyed or eventually bored. A death is a setback but they have managed to make the game so fair to the player, that loosing to a boss is more often than not actually fun, you feel as if you fucked up and not that the game is unfair or that the game is cheating you.

"Dark Souls deserves great praise from me for being a "thinking person's game". The difficulty isn't about mashing fifty hit combos in a matter of seconds or snapping your crosshairs onto people's heads. It's about playing carefully and learning from your mistakes. It also has an amazing atmosphere many games these days lack. It gives you little, so it leaves your imagination open to interpret things the way you find the coolest."
-Dracoaeon - Reddit

"It's extremely old-school and yet freshly modern. You don't play Dark Souls trough and then "be done with it." You will need to replay it countless times and you will find out something new each tine, be it mechanics, story or whatever... then there is of course the awesome community that keeps speculating and finding out new things every day. I'm playing since the original (Demon's Souls) and i do not get tired of playing Dark Souls."
- The dark lantern - Reddit

Online component
The online component is explained through a major part of the story, Time is distorted in lordran, people living in their own time, a hundred years ago, can suddenly end up in your timeline. And such we have co op and invasions. To be allowed to do either one, you must be in human, form. (human form is achieved at a bonfire by sacrificing "humanity" a fairly common item.) and then finding a summoning sign lying on the ground. With this you can enter another players world and either help them with bosses, or murder them horribly.

Story
The story takes place in the land of the gods, Anor Londo. The player arrives here after escaping the undead asylum, where the way of white (a prominent "covenant" that the player can later join) imprisons the undead. Once the player arrives in the world, they don't get much indication of what has happened only a nudge in the right direction from a bloke in chainmail sitting by a "bonfire" (a bonfire is where you can refill your health, level up and refill your potion called an "estus flask") The story before the player arrives lies close to the surface, "gwyn lord of sunlight and his royal knights left anor londo for "the kiln of the first flame" the flame is what sustains life and the light of the world. And to keep it burning, a sacrifice must be made; you have to feed the flame your soul and body.

The combat in the game is fluid, based on a block, and riposte mechanic, keep your shield up is a rule you will learn early on. The controls feel sharp, intuitive and do not feel clunky in any way. The pc port is another story though, the developers promised a complete port, and that is what we got. Keyboard and mouse controls are atrocious but that is a minor flaw as the community has later modded the controls to a playable level.
The bossfights are hard, but rewarding. You feel as if you actually accomplished something when you see the "victory" signal pop up on your screen.

Map
Dark souls location is also wonderfully interconnected; there are almost always multiple paths to a single location, meaning if you know how to play, you can get to your favorite weapon or gear early on. When you first set foot in Lordran you suddenly have the ability to move anywhere you wish, there is actually no need to even kill the first boss, or go through the "starting" area for that matter.

Dark souls 2 was recently announced, little Is known about the game, what the story is or if we get new mechanics. We do know that the new director for the game wishes to keep the game within the same formula as its predecessor.

Classic
The players love the game and the people behind it, the studio seems to care for their customers, which is sorely missed from a consumers perspective. The developers still to this day release small bits of story that can confirm or deny a theory, and this keeps the players interested, long after they are done playing. This drive to find story and meaning behind the game keeps players busy and places this game with the classics.

The DLC of the game called "Artorias of the abyss" adds 15-20 hours of content for the inexperienced player. Coupled with the 50-60 hour long story already in the game makes for one hefty experience. Another great thing about the DLC is not just the length, but the amount of care put into the story, so it did not clash with what we already knew, but enhanced our knowledge.

In short, I hope we continue to see hard, but rewarding games, for far too long have we seen games become four hour long killing sprees with little to no explanation of what you are doing, other than "OMG look a terrorist! Shoot!" Dark souls is deep, on the surface it's a great game, and if you look closely, a compelling story.