Board games on GR

We love games here at Gamereactor (the clue's in the name, right?) and when it comes to the games we play we're looking to expand our scope a little. From here on in we're going to start writing about our experiences with board games too, specifically ones that have some sort of direct link to video games. If that goes down well with you lot, maybe we think about widening the range of games we talk about. Let us know what you think in the comments below.

How Long is Too Short?

The recent news that No Man's Sky can apparently be completed in around 30 hours, and the reaction that this news has brought with it, certainly has caught my attention, and it has me pondering the question: what is the ideal length for a video game?

As someone who plays them in less than ideal circumstances (having to rush through them for review) a complete but somewhat succinct experience can be quite a relief, but that doesn't mean that every now and then I don't like an extended love affair with a game (Crusader Kings 2, Destiny or The Witcher 3 in my case). 30 hours, with the option to get distracted and expand on that if required, seems like a perfectly reasonable period of time to play a game like No Man's Sky, but I also appreciate why some people might be disappointed that the scale of the galaxy built by Hello Games doesn't quite tally with the (prospective) length of the game.

In this case we'll have to wait and see what the future brings, but it's still an interesting question and the answer will change depending on who you ask. As someone who loved the super-short Thirty Flights of Loving just as much as the timesink that is Destiny, I'm going to sit on the fence on this one and say "how long is a piece of string?"

Two very different companies pitched us two very different shows during E3 this year. Sony and Microsoft, not for the first time, went head to head in unveiling their latest wares. Microsoft had an ace up their collective sleeve, but Sony were able to show a line-up of games that had the audience purring. Let's get it out of the way now and say there wasn't a clear winner, although if I was pushed into making a call, I might say that Sony edged it.

The why is perhaps a little more complicated, and were it not for leaks and (potential) absentees, I might well have been singing a very different song. Let's face it, we knew practically everything about the Microsoft presser before it even happened. You can't help but think that maybe Sony knew too, and that their conference would have been ten minutes longer and would have included a hardware reveal of their own. Perhaps the power of Scorpio forced the PlayStation team to hold fire on their own announcement because they knew they were bested. Speculation on our part, fuelled by whispers, but certainly plausible.

Either way, it was good work across the board, with Microsoft continuing the process of rebuilding their reputation, and Sony continuing to deliver great software for their all-conquering console. And while nobody is talking about Nintendo in the same breath as its rivals this time around, it's worth noting that a study shows that The Legend of Zelda: Breath of the Wild was the most talked about game at the show (so far). That's got to count for something.

Finally, let's also shout out for the PC crowd (that includes me), who got another PC Gaming show, as well as a bunch of cross-buy and cross-platform announcements during Microsoft's event. It's a good time to do your gaming on PC.

On top of all that, if you throw in a bunch of games on show at EA Play, Bethesda and Ubisoft, and everything else in between, and you've got a solid E3 all round. It might not have the stellar game that has everyone buzzing (perhaps, possibly, with the exception of Zelda), but we've still seen some big reveals and a few fascinating trailers. Covering it from here in the UK has been largely enjoyable (chaotic, but enjoyable) and, from where I'm sitting, nearly everyone has come out this year's show a bit better off.

As the father of two young boys, games are on my radar in one more than one sense. Not only do I have my own gaming habits to consider, but I have to think about the games that my sons consume too. Given my profession, there's no getting away from this, and because I play and write about games all the time, it's only natural that the boys find them fascinating. Monkey see, monkey do.

Given what I do for a living, as you might expect, other parents often talk to me about what they let their children play, and while I'll either agree or disagree with what they consider age appropriate, one thing is constant throughout each discussion, and that's a shared appreciation that kids today have it so good when it comes to games. They really are spoiled for choice.

Whether we're talking about cleverly made tablet titles that take advantage of the intuitive touch screen controls (something that we now take for granted), or educational offerings on the desktop PC that test the grey matter, or even console games that develop coordination and reflexes (for example, my kids, like so many others, are partial to a bit of Lego-based gaming); there's so many great games for the younger generation to enjoy.

Of course there's some total shite out there too, and with kids being easy to please and an impressionable audience, it's often parents like yours truly that are left to pick up the tab for questionable pieces of programming. However, once you ignore all the rubbish and start to seek out real quality, it becomes abundantly clear that there's plenty of decent stuff for them to play.

The starting point for this blog came yesterday, Saturday, walking through town on the way to the local swimming pool, bumping into a friend and fellow parent, and talking about Disney Infinity and how impressed he was with the depth of the offering. It got me thinking about the difference in quality between what I played as a youngster, and what my children have to enjoy nowadays. Of course, back then, a lot more games were universal in terms of age appeal, and as a whole the game-consuming audience was less mature and it was less socially acceptable (remember when it wasn't really normal to play games?), but I still think it's fair to say that youngsters have never been served better than they are today.

My kids enjoy Lego games (we're currently playing Lego Jurassic World at the moment), Steamworld Dig is another favourite, we're all partial to classic Sonic, and of course Nintendo makes great family friendly titles that we enjoy playing together. We've not got into full-on Minecraft mode just yet, but it's edging ever closer; I fear that addiction is just around the corner.

There's a nice range of titles for the boys to choose from, and I know other parents think the same, even if we don't always agree on when it's suitable to let the little ones start playing games made for a slightly older audience. One thing we all agree on, though, is the online element, and I'm not alone in keeping my kids away from the interwebs and limiting (almost completely) their online interactions. Because while we can trust our kids to play nicely - most of the time - the same can't be said of everyone else, and I think it prudent parenting to be extremely careful about what, and who, they're exposed too.

To sum up this rambling blog post: kids have never had it better. But like most parents, I think it pays to limit the time they can spend playing, as well as being extremely careful about what/who they're exposed to. There's a world of amazing digital experiences out there waiting to be discovered and enjoyed, but as a parent I personally think that we have a responsibility to our children, to expose them to certain games when they're ready for them, which isn't always when they might want to play them.

Xcom 2 is here tomorrow, and I for one am looking forward to personalising my cadre of elite marines and taking on the alien scum. One of my favourite things about Xcom, and the reason I love the series so much, is the bond you form with your soldiers, this because of the permadeath feature, but equally because of the range of customisation options on offer. In particular, being able to name your soldiers makes such a difference.

But who to name them after? My last play of the original game (well, the reboot) saw me name my soldiers after popular sci-fi movie characters, which worked better than my first play, where I named them after my friends. Watching your buddies die is less fun.

So which way will I go this time? Name them after the players at my beloved Arsenal FC? No, they'd just bottle it and finish in fourth. Name them after musicians? I'd be worried they'd all check out aged 27. What about video game characters? That might work... Hmmmm. Decisions, decisions. What I don't want to do is spend too many hours of my initial play through customising my troopers, because you know, there's aliens to kill!

Regardless of what I call the troopers in my private army, I can't wait to see how this next game plays out. Expect my thoughts on Xcom 2 in the nearish future. 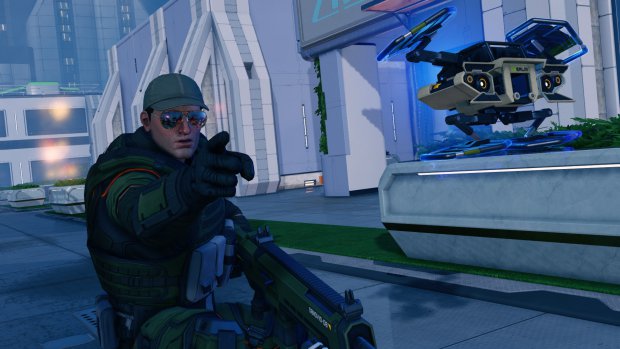