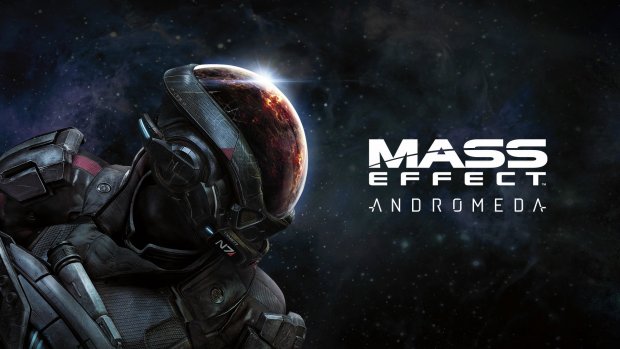 This post is tagged as: review, Mass Effect, games

Andromeda is the fourth entry in the Mass Effect series, but kicks off a brand-new story. In BioWare's new third-person role-playing game (RPG), play as the main protagonist Ryder, a human adventurer who travels through an age of advanced technology. Players find themselves on a quest to help humanity thrive in a new galaxy. The game is massive with a lot of activities, remarkably minimal of which is enjoyable. It's bland at the start and tedious to play at times. Soon after the character's father sacrifices himself, the character is thrown early into the role of Pathfinder. As the Pathfinder, the player is responsible for making planets suitable for colonization, initiating the first contact with new aliens, investigating the remnants of an advanced ancient civilization, and preventing the Kett from destroying everything.

The plot is broad as it gets. The series' signature multiple choice dialogue wheel feels outdated. Whereas, the character and non-playable character (NPC) stare awkwardly at each other until the player chooses a dialogue to say. This method of presenting conversation did put BioWare at the forefront of narrative-driven games before, but it is losing that feel of realism. It does not help that the voice acting is stilted, and the strange voice editing made characters deliver lines at off-putting intervals. Moreover, creating some unnatural conversations. Thus, not reflecting on how real people talk. In addition, Andromeda removed the original trilogy's good "Paragon" and bad "Renegade" choice system in favour of choosing a variety of different tones that do not lock players into any specific morality. There are four conversation options to choose from, branching arrows, question mark, two-people, and a large heart. Ryder's personality is supposed to be shaped by these dialogue choices, but they rarely impact the gameplay experience. They are there to give the players a sense of feeling they have a say in things.

The facial animations are weird, as NPCs often do not focus on players they are talking too. Also, they sometimes share some awkward facial features, which does not go with what they are saying/doing in the current moment. The unique thing about this, all these faults are mostly tied to the humanoid races. As they tend to feel like soulless beings.

The game has a problem progressing through the main storyline, alternating with many side tasks and lacks indication of the primary quest. As this often redirects players primary objective. With that being said, a lot of the "Additional tasks" feels like busy work and provides little reward upon completion.

Players are expected to terraform harsh planets into inhabitable ones. As it requires the Pathfinder to access monoliths left behind by the "Remnant", a mysterious civilization. These monoliths also give players access to big Remnant Vaults. They are dungeons which look similar to each other and play out the exact same way. As this causes the game to lose its immersion. The best way to find them, players must strap into the Nomad, the iconic vehicle used throughout the Mass Effect series. Consequently, travel across vast distances on planets; while there aren't many planets to land on in Andromeda, the very few that are explorable, are enormous. During their travels, players could find themselves exploring some harsh climates and terrain, only to have it ruined by slow rendering pop-up textures.

One of the main ingredients for an open-world RPG is to have an inventory management system, but Andromeda messes it up with the half-dozen subfolders that categorize the items. Especially when using the journal. It holds way too many different categories of missions such as story missions, side missions, character quests, etc. After a while it becomes irritating; moving back and forth through these categories. Players are not even given the option to sort items. Therefore, all resources are defaulted; sorted alphabetically, regardless of rarity. Research is also divided up the same way, which quickly amass to a ton of blueprints that become useless. In fact, there is a 50-item limit and it includes weapons, armor, mods, fusion mods, and consumables. In an RPG game, this tallies up rather quickly, but soon after BioWare's design choice, they increased the capacity to 100. Everything being said, plenty of Andromeda's features are not explained, forcing players to track them down through trial and error.

An interesting concept the game added was the aspect of benefitting from multi-player loot in single-player. This provides a huge advantage to online players because they are capable of buying loot boxes. These loot boxes can contain powerful gear, which could be used in both multi-player and single-player; adding negative feedback in both modes.

Andromeda made some improvements to the combat system from the previous series. Players are able to queue squadmates' abilities. In addition, each loadout includes three skills and a profile. These profiles are specializations that establish bonuses to the character based upon player's allocation of skill points across skill trees. Therefore, players are capable of mixing and matching abilities from all class types. Moreover, the covering feature was slightly improved, where the character can smoothly slide into cover. Furthermore, while in combat, players automatically cover once near an obstacle. Unfortunately, it can become a pain at times because the system might not activate when needed or unintendedly position players into cover. With that in mind, blind fire was implemented, adding a sense of security to keep enemies at bay. Thus, giving players a chance to recover their shields.

Andromeda, even introduced crafting, giving players the ability to construct their ideal weapons. The weight of the weapon still factors in, by decreasing the power recharge speed to balance their feedback loop. Melee weapons are a new addition to the combat and each one varies in performance and appearance. These weapons do not need to be equipped through the weapon wheel. They are automatically used when the player hits the melee action key.

If you can move passed the slow start of a story, repetitive menu, and half-witted facial animations, Andromeda can be enjoyable. As it opens and allows you to explore their beautifully crafted planets.

About Author: Just a typical gamer trying to get by. I love video games and hope to be a writer for a video game company, or make a living as a Video Game Journalist. Story is my passion though, and I love to create fun, unique stories. The sci-fi/fantasy genre is my specialty.