Italians do it better #3: Gordon Ramsay

Yesterday I decided to let Sky TV enter my life. I climbed up to my roof, held the legs of a poor technician who installed a parabolic antenna by leaning out the edge, redefining the job safety laws at the same time. My girlfriend and I spent our Saturday night watching some good shows, starting with an old episode of Lie to Me. Then we watched things blow up in Mythbusters. Finally, my girlfriend decided to zap to Ramsay's Kitchen Nightmares. That show is hilarious, especially for us Italians when an Italian-like restaurant is involved. Basically, you can understand why Italian food often sucks when cooked abroad: they use frozen or precooked food and they absolutely have no idea of the Italian taste. Sausage with cheese? What the fuck?

Ramsay gets pissed and tries to teach those unfortunate chefs how to cook some decent food by yelling profanities at them. It's a good technique, I guess. But, watching yesterday's episode, I noticed that even master Gordon Ramsay made a HUGE mistake while eating spaghetti. He used a fucking spoon. Me and my girlfriend were like "Argghh! What the hell?". So, I decided to write five simple rules for the good spaghetti-eater.

1. Don't use a spoon. Let's start with the rule Gordon Ramsay broke. Rolling your spaghetti by using a spoon as a support for the fork is considered somehow boorish. I talked to a polish friend once, asking him why he asked for a spoon at the restaurant. He told me "Because it's more polite, I don't have to get closer to the plate with my face". No, my friend. It doesn't work like that. If you roll your spaghetti properly, you won't bend like a pig in its trough.

2. Don't cut em. This is a thing that really pisses me off. As you probably know, there are two types of pasta. The first one is called "pasta corta" (short pasta, including maccheroni, fusilli, farfalle, penne, etc.), the other is "pasta lunga" (long pasta, typically spaghetti, tagliatelle, bucatini, linguine, etc.). When the pasta is called "long", it's because it's supposed to be eaten in its entire length. Cutting spaghetti is an insult to the chef, and someone here considers it rather disgusting.

3. Don't slurp. You're not eating chinese noodles. Roll your spaghetti, put the fork in your mouth and enjoy.

4. Don't exaggerate. Don't roll too many spaghetti with your fork. It's not a fast food, a big bite won't be more satisfying than a small one. Roll the correct quantity by bending your fork in the plate, starting from the edges of it. Don't ever put your fork in the middle, vertically, otherwise you'll roll half of the spaghetti in your plate.

5. Don't inundate everything with parmesan cheese. If you love grated cheese on your pasta, be sure it's Parmigiano Reggiano, Grana Padano or Pecorino DOC. Use an appropriate quantity (a spoon). Please notice that there are some dishes that cannot be accompanied with parmesan, typically the ones including fish or seafruits. Some years ago I met a German lady in Venice, sitting next to my table at the restaurant. She ordered "spaghetti alle vongole" (spaghetti with clams). When the waiter came with the food, she asked for some parmesan. The waiter refused to carry out her request. She insisted, and finally ruined that little masterpiece of Italian cuisine with a load of grated cheese. Gross.

Finally, I would like to conclude with a couple of things you should definitely do while eating spaghetti. Eat slowly. Enjoy your meal, try to isolate the different flavors that compose your dish. Choose a simple recipe: as Gordon Ramsay correctly says, the secret of Italian food is the simplicity. But please, Gordon, don't ever use that spoon again. 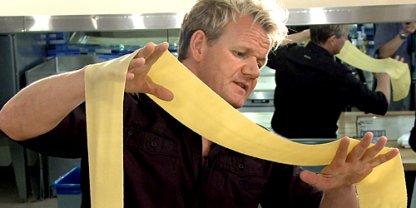 Offline
T-man Edited on the 20th of August 2011 at 14:38.
Man, it's just food. xD Some people like to eat it the way they enjoy it the most. I for example, sometimes like to eat my cevaps (Bosnian food) with ketchup (not that often though), while many would consider it blasphemy. ^^

Offline
Lorenzo Mosna on the 23rd of August 2011 at 08:07.
It's not "just food". Not in Italy at least. Food is part of the Italian culture like arts and language. I believe food is one of the few things Italians are proud of, that's why we tend to defend it quite strongly.