We were first introduced to the concept of the Blair Witch via the 1999 found-footage phenomenon that was The Blair Witch Project. This was a film and an idea that enjoyed undeniable success, but since then the franchise hasn't always been as successful. There was a follow-up film in 2000, another modern adaptation in 2016, and video games in the early noughties as well, but with none of these efforts leaving the same mark as the first instalment, the simply-titled Blair Witch is now here to try and reclaim that legacy on PC and Xbox One.

Bloober Team - famous for Layers of Fear and Observer - is the developer stepping up to the plate to have a crack at the world of horror that awaits in the forest of Burkittsville, Maryland. Much like their previous titles, this is a first-person affair, and you fill the shoes of Ellis, a man with a troubled past and a dog called Bullet who goes into the forest in 1996 (two years after the events of the 1999 film) to find a missing child called Peter Shannon. It's not all rosy in these woods though, but we knew that going in.

At the opening of the game we're thrown straight in, with Ellis parking his car up and gearing up for the search. He's alone though, despite all of the cars parked nearby, and he takes it upon himself to join the search with Bullet. Throughout we get flashbacks as to what has happened in his past and how he and Bullet came to this point, but with the game being roughly five hours long in one playthrough, we won't talk too much about the story here for fear of spoilers.

All you need to know is that you're alone and vulnerable in a forest that has claimed many victims already, and if that isn't the best premise for a horror game then we don't know what is. The setting itself is perhaps the most effective part of the terror Blair Witch invokes. In houses and corridors you're blocked in and can cover yourself from certain angles, but in the woods there is a vast expanse stretching endlessly in all directions, meaning you're never quite sure who's watching and what could be out there waiting for you. It's a genuinely unnerving experience.

It's not quite on rails, but for the most part, Bloober Team does a good job of gently guiding you through this forest. Everything is technically open, but with the use of high walls, piles of logs, and other subtle measures, the game has a path for you to follow, although that doesn't stop you getting lost at times. These moments were few and far between though, and most of the time we explored without frustration, even discovering little secrets hidden off the beaten track.

This setting is unnerving and disturbing in the daylight, but this is cranked up a notch when night descends on your search. With only torchlight and the limited night vision of your video camera to guide you, it's incredibly nerve-wracking to play, and this is when we actually encounter one of the most divisive elements of the game - the monsters.

These aren't visible and manifest themselves in briefly tangible shadowy figures, but considering the appeal of the 1999 film was that you didn't see anything, this won't be to everyone's tastes. The good news is that they are used sparingly and they don't chase you down too aggressively, and when they do appear you need only to follow Bullet's growls to shine a light and banish them. There are also very chilling moments where they are totally invisible, and you need to identify and avoid them by seeing their red outlines on the camera screen.

Later on you'll get to one of the most frustrating elements of the game, which we also found particularly frustrating when featured in Observer - the instafail stealth sections. These require you to follow a glowing trail via your video camera screen while avoiding the monsters in the room, but the thing is that they stand so close to the trail and prowl around that they attack you anyway, or just instakill you if you glimpse their toenail for a second. Seeing the monster jump at you for the fifth time kills the scares dead, and we could've done without that.

While Bullet is good for identifying hostiles, he's actually much more than that, in fact, he's your core tool in the game. There's a whole command wheel in which you can scold him, tell him to stay, get him to follow you, and - most importantly - ask him to seek. This lets him bring you important story items or just objects he's discovered (you can also find plenty yourself), and of course, you can pet him and feed him treats if he's been a good boy.

It might sound like a joke, but treating Bullet well is actually very important. Bloober Team told us in London last month that your treatment of the dog has consequences for the story, and the other decisions you make - like how much you use your phone to answer calls and read messages, or the famous Blair Witch totems that can be destroyed - will affect the outcome of the narrative.

There's more to the game than just exploring, finding items, and commanding your dog though, as there are little puzzles to solve too, from finding parts for a rail cart system in order to progress, to unlocking doors using your video camera. In a reality-bending twist, what you witness on the camera influences the corresponding items in the world, so if a door's locked you can get to a point where it opens on the tape so you can go through. It's a weird addition, but considering what else is in the game we can let it slide. After all, the witch is all about twisting your perceptions of reality, so who knows what's real anymore?

The puzzles never feel like they're wedged in there, nor do they feel too 'gamey' either. Bloober Team does a good job of contextualising everything in the world, and the moment-to-moment gameplay is satisfying and immersive as a result. You really do get lost in the woods as you explore, and that creates a tension that a Blair Witch game needs. You're not seeing an awful lot that's scary, but the anticipation of what's next is killer. Blair Witch fans will also appreciate the inclusion of the house from the first film as well, which is a real treat to explore as it was recreated in loving detail.

In fact, visually the game is very satisfying, especially with the use of light and darkness. Floodlights and your torch mean light is used sparingly, but the moments in the daylight also help give an ebb and flow to proceedings. It's not all one trudge through the midnight forest, and there are plenty of spooky environments to make sure you're not just seeing the same thing over and over again, as you're always finding detailed locations to explore, providing hidden gems of world-building items to sift through.

Because of all of the above we were rather disappointed when the game descended into an overly long and messy end sequence that seemed to last forever. The rest of the game is so tight and focused that this seems like a huge misstep after all of that, struggling to wrap up loose ends while losing all the subtle horror that came before. We were begging for it to be over by the end, and this also happens to be where the instafail stealth came into play as well.

Even with the disappointing ending, we can thoroughly recommend Blair Witch. It's Bloober Team's best work to date and is a treat for not only Blair Witch fans but horror enthusiasts as well. It's effective and really put us on edge as we made our way through the forest, just as we remember doing back in 1999 when we saw three filmmakers get lost in the woods as well. 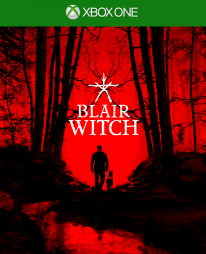