We'd had a few problems before we even started playing Blacksad: Under the Skin for review. After several instances of the game going pitch black on the screen, freezing and hitting a technical wall in the middle of a dialogue sequence, we were about to give up - the game was simply broken. We went in feeling hopeful because we knew that the comic series is great, but were quickly let down. A day passed after we had fought with the technical aspects of the game and we checked back in and we're glad we did push through because underneath all of its flaws, Blacksad: Under the Skin is a solid adventure game with a good story.

If you haven't heard of Blacksad before, it can be briefly described as a series of hard-boiled crime comics with the slight twist that all its characters are animals, or rather, they're anthropomorphic animals. John Blacksad, the protagonist, is a private detective and a black cat with a white nose. Blacksad is your typical noir detective; he has a strained relationship with his peers, is tormented by his past, and spends his free time smoking cigarettes and drinking whiskey. Disney made the 'animals with human qualities' setup popular, but Blacksad takes it a step further, throwing the characters into a world of hard crime, and now the comic series has been turned into a video game.

Blacksad: Under the Skin is not based on any of the comics and instead opts to be a standalone story. One morning, the owner of a boxing club is found dead. He has allegedly hung himself, but his daughter hires Blacksad to investigate the case. Soon, it turns out that there's something fishy going on - something that leads deep into both the criminal underbelly as well as New York high society.

The story is well-written and has all the crime-noir elements you'd expect with lots of twists and plenty of intrigue, and compared to the comics, we'd say the story is on par with the series. It's full of grey areas where you as a player are never quite sure if you're on the right or wrong side. Throughout the game, you'll constantly get the feeling that your decisions will have a lasting impact and consequences. In the very first scene of the game, for example, you'll decide whether or not to accept a bribe for not showing an angry rhino's wife pictures of her unfaithful husband. Far into the story, this choice still has consequences, and it stands as a good example of what the developers have tried to do Under the Skin. All-in-all, the consequence-based gameplay works well, but as the game concludes, there are a lot of questions that are left unanswered. Of course, this is a typical crime story outcome, but when it comes to choices you've made as a player, you're expecting answers or at least a conclusion. If you don't get that, the entirety of the case feels as though it didn't matter. The story is, despite this, really good.

The characters help the story quite a bit. Unfortunately, the visual side doesn't quite live up to the cartoon. Oftentimes, it doesn't impress at all. Blacksad himself is well-designed. His face is expressive and the voice actor portraying him does so magnificently. It's clear that the developer has put a lot of time and care into the creation of the protagonist, but you can't say the same for the rest of the cast. Virtually all of the other characters lack detailed expressions, for example. Maybe the developer thought it would be too costly to go deep with each animal character, but the game suffers because of the lack of detail.

Some will like Blacksad because of the fact that all of its characters are animals and others will find it odd. The fact that they're animals also makes it a little bit difficult to relate to the characters. Race also plays a big role in the universe, but it's honestly incredibly confusing. Some animals are referred to as black and others as white, but the distinction between them is hard to follow when they're all different animal species. There is some cunning social commentary within the narrative of Blacksad, but its balanced on a very fine line that breaks from time to time.

If one was to compare Blacksad: Under the Skin to another game, we'd say it's very similar to a Telltale game mixed with L.A. Noire or Sherlock Holmes: Crimes & Punishments. You have to investigate tracks left behind on various scenes of interests and based on what you find you'll be able to make deductions to help your case. What you find out influences the opportunities you'll have in dialogue with others, and it's the dialogue sequences that are the core of the game. This is where the plot evolves and the core decisions have to be made. Often, you'll have a limited time to choose what you want to say and this can have major consequences to the direction of the conversation. Sometimes, however, the game will have a set dialogue arc from the start while having you believe that the choice you make will matter when it, in fact, does not. The choices that do have actual consequences are satisfactory, but there are so many choices that never reach a conclusion which is frustrating.

However, that is nothing compared to the frustration that is triggered by the technical issues the game suffers from. We can typically be quite forgiving when playing a game such as this one as long as the story is good, however, there are just too many technical flaws here. Dialogue sequences come to a complete stop, textures fail to load, and the game freezes and crashes way too often, which is a shame. We often experienced conversations stalling and we couldn't do anything to fix the issue other than to close and reboot the game completely, which sometimes led us to play a 30-minute sequence all over again. The biggest thrill we got when playing the game was seeing how long we could play it before it crashed or froze up. We tried it on a regular PlayStation 4 and sure, it may well run better on a PS4 Pro, Xbox One X or on a powerful PC, but it's clear that the game simply isn't finished. We don't know if the developer had investors breathing down its neck, rushing development, but releasing a game in this state is not okay. It's especially tragic as it shows just how invested the team has been in the source material and how much time and effort has been put into the script.

We really enjoyed Blacksad: Under the Skin despite its flaws. The story is good (surprisingly so), and it hits all the right notes without being a worn-out cliché. Blacksad is a private detective who constantly has to navigate his own morality. Maybe he has a heart of gold, but what does that mean when he's living in a world where everyone is hiding something? Is he in the wrong for rummaging through their secrets? We really like the universe and how the choices you have to make are (mostly) meaningful. Unfortunately, there are those that never really go anywhere. The gameplay itself isn't mindblowing, but it doesn't have to be. Still, we can't recommend the game at this moment in time as it's very broken. We sincerely hope that the developers are quick to correct the issues because the state it's in right now is simply embarrassing. If you're a big Blacksad fan, you might be able to look past the problems, but everyone else should wait until the issues are fixed.

Advertisements
Gamereactor UK
+
Great story, nice design, choices are generally meaningful
-
Lots of technical issues, some choices never reach a conclusion
is our network score. What's yours? The network score is the average of every country's score

"If you're a big Blacksad fan, you might be able to look past the problems, but everyone else should wait."

In two weeks, the noir detective game Blacksad: Under the Skin, which is based on the black cat's iconic comic books, will be released on pc and consoles. Today the...

Blacksad: Under the Skin choices define the "hero" you become

The game is based on a comic book series, although the story is unique to the game, as we heard at Gamescom. 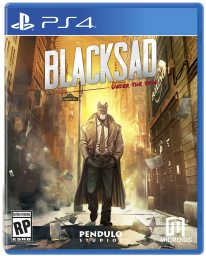