This is a concept in new Netflix film Black Mirror: Bandersnatch that we are not only greeted with, but invited to question. We are told throughout our lives that you can't change the past, and even the characters around the protagonist Stefan Butler tell him that, but as you might have expected from a thriller with the name 'Black Mirror' attached, not everything is as it seems when it comes to Bandersnatch.

The film follows Butler as he seeks to turn the book Bandersnatch - a choose your own adventure book no less - into a game with multiple branching pathways. The film is set in 1984 (because of course it is), however, so programming a game with such complex timelines and alternate realities isn't easy, and Butler soon gets bogged down under the weight of the pressure to deliver the product to his bosses in time, causing friction between himself and his father.

Black Mirror is a franchise that gets praise with every iteration, but what's really got people talking here is that this Netflix film allows you to choose your own destiny. Just like the titular book and the game Butler is creating, here you can get different timelines and of course endings by making key choices with your remote, controller, or whatever you're using. In brief windows of time, you're invited to make key choices in the plot ranging from mundane things like choosing cereal to whether or not to destroy your computer in frustration when things go pear-shaped.

As with these kinds of branching narratives (Until Dawn springs to mind), you're of course liable to get some premature or 'bad' endings, and Netflix redirects you back to try another key option if that happens. The beauty of this system is that you're given a few choices once you end Butler's story, rather than getting a roadblock Game Over screen, and so you never have to wade through and get tangled in the choices you make. Netflix has a subtle hand to guide you, to make this concept easier for those who might not be experienced in it.

Another great aspect of Bandersnatch is that the editing makes it seem like your choices are playing into the film as the plot seamlessly continues, rather than simply triggering another video to play. What we mean by this is that, due to smart cuts and a long window in which you can select your options, the flow doesn't stop no matter what decision you make, so you're never taken out of the immersion.

The storyline isn't revolutionary and plays on the reputation for weirdness that Black Mirror has garnered over the years. That said, it's great to see Will Poulter deliver an excellent performance once again, as the actor has proven himself before with the likes of Detroit (no, not the android game), and it's good to see him in another serious role where he excels at playing the guiding hand to Butler... if you so choose.

A lot of praise has been given to Bandersnatch for its interactivity on Netflix, with phrases like 'original' and 'innovative' being thrown out there, but this concept is anything but new. Of course, games have been doing this for years, with FMV enjoying something of a revival recently with titles such as Late Shift and The Infectious Madness of Doctor Dekker. On the other end of the spectrum, more recently we've seen similar choose-your-own-adventure mechanics appear in television shows aimed at younger audiences, including one from Netflix (Puss in Boots).

What should instead be praised about Bandersnatch is that it's introducing the concept of interactive storytelling to a wider audience since those watching on Netflix, making choices via their remote controls, are seeing the same things that those of us who play games have been seeing for years. It's popularising interactive storytelling, and you could even make the claim that Bandersnatch is, in fact, a video game for the methods it deploys. It's certainly an interesting product to examine, but it's not the strongest thing you'll see from Black Mirror, even if it is one of the most talked-about.

An interactive story on Netflix is a pretty new concept, but Bandersnatch isn't exactly original. 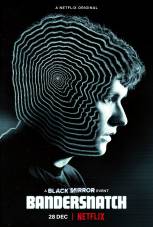