2K Games has been talking about their Bioshock franchise, with CEO Strauss Zelnick confirming the importance of the franchise to the publisher.

During the same talk Zelnick confirmed that all told the franchise has shifted more than 25 million copies, with Bioshock Infinite accounting for at least 11 million of those sales.

With series creators Irrational Games no longer handling the franchise (2K Marin have that responsibility now), there has been plenty of speculation circulating with regards to its future. While the story that Irrational started was certainly wrapped up in Burial at Sea (the expansion for Infinite), there's still plenty of places the new custodians could take it. We certainly can't wait to find out more about the plans for the universe.

"This could have been the crowning moment of the Bioshock series."

"Burial at Sea is an enjoyable blast through a familiar setting. But the short run time raises a difficult question."

Irrational Games is no more.

Bioshock: The Collection rated by ESRB

The evidence is mounting. We can see a lighthouse in our future.

Is Bioshock finally coming to PS4 and Xbox One?

New signs of a Bioshock Collection for the current generation surface.

Take-Two boss reiterates that it's "a permanent franchise." 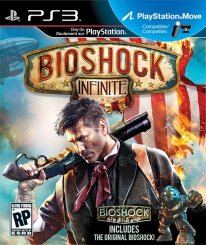