Bioshock was something of a revelation when it was released back in 2007. Not because it did anything terribly exciting when it came to the game mechanics, it was basically building on what we had seen in games like Deus Ex and System Shock. A pretty standard first person shooter affair spiced up with abilities and a bit of hacking. What made Bioshock so special was the story and the setting. The torn up underwater city of Rapture was far removed from the typical themes of first person shooters and the story was a well written piece of drama with a twist that really shook me up. I loved every minute of it, but I never felt the need for a sequel. And I never felt the need for any multiplayer. Now we get both.

The story presented in Bioshock felt complete. The boy who left the idyllic city, forgot about it, stumbled upon it by a supposed accident and eventually went on to unravel his past and the corruption of Rapture. I never felt a need for a sequel, although at the back of my mind I wanted to know more about Rapture. The story of Bioshock 2 takes place 10 years later in a Rapture that is now controlled by Sofia Lamb.

You are Subject Delta, the original Big Daddy, forced to blow your brains out in 1958 (before Bioshock) and now somehow brought back to life to save the little girl Eleanor, stop Sofia Lamb and team up with some familiar faces including Tenenbaum. It comes across as a little contrived at first, but the story grows on me. There is some sort of cult, and blue butterflies can be seen all over the place. The settings and surroundings are as beautiful and well designed as in the first game, perhaps even more so, and this time you are finally going to spend some time under water.

If you played the original Bioshock you may be a bit concerned that the main character has been replaced by a Big Daddy. After all, one of my least favourite parts of Bioshock was when you had to put on the Big Daddy dress and guide a Little Sister through one of the final levels of the game. Fear not. Subject Delta is no ordinary Big Daddy. He can use plasmids with his left hand and a number of interesting weaponry with his right hand. Combining different weapons with abilities and plasmids is core to the gameplay experience in Bioshock 2 and it's also core to the multiplayer experience. It's very different from what most of you have been playing online, although personally I don't feel the whole Bioshock experience lends itself well to multiplayer. I'm sure some are going to like it a lot, it just wasn't my cup of tea. I do appreciate the fact that areas from the original game have been redesigned for multiplayer. It's a nice touch and it is definitely a different experience to your typical online shooter experience.

Some of the novelty of Rapture has worn off for obvious reasons. You know what the Big Daddy, Little Sister, and the citizens are all about, but there are obviously some changes too. When you happen upon Big Daddys and their Little Sisters you now have a few options. First you're going to have to kill off the Big Daddy (a bit like killing your little brother I suppose), then you can either adopt or harvest the Little Sister. Harvest her for quick and easy ADAM (used for new plasmids and tonics), or adopt her and have her collect ADAM from a couple of corpses. When you set her down to gather the ADAM, inhabitants of Rapture will be drawn to you and you are going to have to fend off a few waves of various splicers.

This is a good time to use trap rivets, gun turrets and bots to your advantage as your will have your hands full until your Little Sister has gotten the ADAM. Another tip is to use the hypnotize plasmid to have splicers turn on each other and stay clear of you and the Little Sister. It's very intense, and it is nice that you can prepare for the onslaught in advance before you put your Little Sister down to collect the ADAM. After she has collected the ADAM from two corpses you can either choose to harvest her or rescue her and turn her into a normal little girl again. You won't get ADAM for this, but in return the Little Sister you rescued might have a gift for you later on. It's your choice, but guilty of having harvested Little Sisters in Bioshock I played the good guy. In the end it probably evens out.

I'm still listening to recordings left all over Rapture. There are little stories about the people of Rapture and things that tie in with the main story and the cultists. I'm not really following it all, and much like in the first game I find myself a little overwhelmed by the story. Thankfully, it works regardless of whether you are paying attention to every detail or not. Much of the story is told through wall scribblings, the environments and the characters you encounter. Your eye is always firmly on the price of Eleanor, and your guides Sinclair and Tenenbaum will keep your eye at the price.

You will face a lot of familiar enemies; Big Daddys in the shape of Bouncers and Rosies, spider splicers, Houdini splicers, leadhead splicers and thuggish splicers, but there are also new enemies. The brute splicer will feel almost like a boss,when you first encounter him, and he will grab hold of things to hurl at you and charge you with the power of a fat guy. And then there is the Big Sister. I won't reveal to much about her, but she is a formidable foe and her speed makes her the most difficult of your regular encounters in Rapture. She is tied to the Little Sisters and when you harvest or rescue one of the little ones, she might come knocking and then you better be ready.

There is a lot of variation to the fights, although in general it's more intense than in the original game. The pace is higher and you are going to be scrambling to use your first aid kits at times even at the normal difficulty level. There are plenty of vita chambers spread out though, so there is no need to worry too much, and there is always a different strategy to try in any given situation. A few hours into the game you will have so many options when it comes to combat between weapons, plasmids, tonics and ammunition, that only your imagination sets the limits. With that said the pacing and encounters do tend to get a bit repetitive and predictable.

Bioshock 2 has a quality similar to that of Fallout 3's rundown versions of the ideals of yesteryear. There is a lot of comedy ranging from the situational kind to the more ironic and subtle to be had every now and then to lighten up what could easily be seen as a rather dark story. The visuals are complemented by a wonderful soundtrack, and deranged voices that give the presence of splicers away. I found Sinclair's voice a bit too much at times, but that is probably the only bad thing I could say about the sounds of Rapture.

The journey starts out a little slow, but as your arsenal of plasmids grow and you start to get into the adventure proper things open up more and it gets more varied. The sense of exploration is maintained throughout the adventure as new areas are opened up. It may not feel as special as the first time around, but it's still an experience miles from what you would normally experience in a video game, and one you should not miss out on.

Gamereactor UK
+
Inspired environments, lots of plasmids and weapons to play around with, great score sets the mood, well written script, great attention to detail.
-
Not very different from the original, a bit repetitive at times, Subject Zero is not the most inspired main character.
is our network score. What's yours? The network score is the average of every country's score

REVIEW. Written by Emil Ryttergaard (Gamereactor Denmark) on the 7th of September 2010 at 16

Minerva's Den DLC for Bioshock 2 is finally out on Mac

The Mac shall inherit the Earth.

The studio behind Bioshock 2 and The Bureau reportedly closed down.

Development is back on

You'll have to live without Minerva's Den 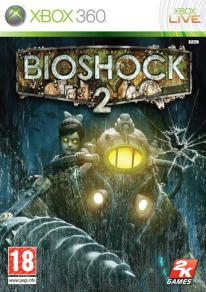