It looks like, even though we're talking about very expensive games with top-level movie-like production values, the collaboration between Sony PlayStation and Parisian studio Quantic Dream has been quite profitable so far. And now as an additional fact to support this claim, CEO Guillaume de Fondaumière has revealed more about the studio's previous game's performance, with Beyond: Two Souls apparently sitting at around 2.8 million copies sold (that's across both PS3 and PS4).

The little factoid can be found over on the CEO's public LikedIn profile, but it is unclear when was it actually updated. Additional facts gathered at ResetEra complement the successful collaboration, as it seems both Heavy Rain, the aforementioned Beyond: Two Souls, and the recently launched Detroit: Become Human were all profitable, with the latter breaking even faster than its predecessors. All of them became million-sellers (Heavy Rain sits at 5.3 million as the studio's most successful release), and the three of them cost around $50 million dollars including both development and marketing.

And now, with Beyond: Two Souls being recently included with PlayStation Plus's instant game collection, even though sold units won't increase all that much, lots more players will get to experience Ellen Page/Jodie Holmes's emotional journey. Have you already?

"The story itself is really enjoyable (if slightly predictable); a good thing considering so much weight hangs on its ability to entertain."

Beyond: Two Souls rumoured to get Steam release

Could Quantic Dream's star-filled adventure game Beyond: Two Souls be getting released on Steam?

Beyond: Two Souls for PC is up on today's stream

Quantic Dream's adventure has just launched on the Epic Games Store, and we're here to experience it all over again.

We streamed all three games on the console yesterday.

Beyond: Two Souls should get you in the mood for Detroit. 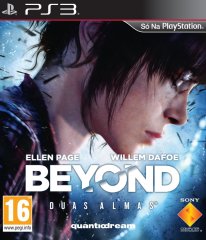