Rubber hose animation and the style of early 20th-Century cartoons is something that has come back into fashion in the world of video games, with the likes of Epic Mickey and - more recently and famously - with the ultra-hard Cuphead. It's now time to take that animation style and apply it to the world of horror though, which is exactly what theMeatly Games Ltd. has done with Bendy and the Ink Machine, having released a complete edition after progressively releasing each chapter since February of last year.

This old cartoon style forms the central pillar of the experience, as you enter Joey Drew Studios as an ex-colleague of Drew's, having been invited back to check out something that he's said you need to see. Upon entering you realise that everything is empty and you're the only one wandering the halls... or are you?

The title of the game refers to the character that the studio is famous for - Bendy, their own version of Mickey Mouse. That's why you'll see drawings, cardboard cutouts, videos, and more of Bendy everywhere you look, his cheeky unerring grin hiding something a little sinister behind the facade. In fact, the eery quiet of the studio plunges you into an ominous atmosphere right from the beginning, and it's only when the cutouts start moving that you really get a sense of fear.

Throughout the first chapter scares are used sparingly but to great effect, and for the most part the horror consists of moving around, solving light puzzles, and finding out how to move deeper into the studio. After a while though the devs give you tools and change the way the game plays, as the slow and quiet pace makes way for far more noise as you come into direct contact with enemies, having to fight them off with weapons. These are carefully curated though, and the game gives and takes them away from you where appropriate, meaning it never becomes a full fighting experience.

The monsters you'll face are varied. There is one overarching enemy that you can't kill and will be forced to hide from when he shows up - much like in Alien: Isolation - but for the most part, you'll be hacking at monstrous grunts made of ink. They die relatively quickly and don't get frustrating as an obstacle, but considering they can pop up at any time with a loud noise (especially The Projectionist), they provide a real jolt of terror as you wander the halls. That said, landing hits on some of them proved a little frustrating at times, as it's hard to get a hit despite aiming right for them.

By showing its hand a bit more and pushing you into an active role with weapons the game does sacrifice some of its original scares, but never loses its atmosphere. Things get more and more disturbing as you step further into the inky mess the studio has descended into, and there are still jumpscares aplenty due to excellent sound design. The tension never overstays its welcome though; in fact, nothing does as you'll never be stuck in an area, on a puzzle, or fighting an enemy for too long. Frustration can be a killer for horror, but the ball is always rolling with Bendy.

Due to this continued movement, you may find the game finishes quite quickly (we saw the credits roll after three and a half hours), but the puzzles you encounter are varied and fresh. Some might see you trying to win at fairground games, while others need you to mould pipes out of ink, all while treading carefully around the menaces that await. It's all very simple without being boring, and it doesn't suffer from that chronic case of "walking slow means more horror, right guys?".

We haven't forgotten about the art style, but this is best mentioned last because it's the standout strength of the entire experience. In the modern day we look back on the old early-20th century cartoons with a touch of unease due to the spooky deteriorated images and the questionable themes (portrayals of minorities, for example), and what theMeatly Games has done effectively here is extract that unease, that sinister feeling we get when looking back on these cartoons, and purifies it to make it all horror.

Nothing about the studio is safe and lovely like you'd expect from cartoons, as everything is a mask (literally as well, although we won't spoil that) for the clearly corrupted nature of the place. Satanic symbols and distressing scrawls are paired with the abandoned mess that the studio has left behind, and it's clear that the cartoons are behind it all. After all, an ink machine is responsible for effectively drowning the building.

It's easy to focus on the cartoons themselves as the best thing about the visual style but the way the world is crafted also has its own unique style. As you can see in the screenshots and videos below, everything has a yellowish tinge to it, like old degraded footage, and up close you can even see the finer details look as if they were hand-drawn themselves.

Within the first half an hour of playing we were reminded intensely of Bioshock, and if you're a fan of that classic there's a high chance you'll find a lot to love here too. One big part of this is the vintage setting, but we also appreciated the same use of environmental storytelling with audio diaries to convey extra narrative. These old exaggerated accents slowly piece together what has been going on, and give some very chilling accounts of the disasters that have unfolded. These are key to delivering on the atmosphere promised by the opening sections, and even give clues on what to do and where to go.

That's not the only thing Bioshockesque about Bendy though. A lot of the characters are very era-specific like we saw in Rapture, but then there's also the isolation we get as a protagonist. Henry (our hero) is a lot like Jack in the sense that he's faceless and is pushed and pulled by the wills of those around him, and it's only by fulfilling tasks for those in control of the complex that he can move around. He's both the one person that can save the world, while at the same time he has had all of his agency taken away from him.

With all its merits there are unfortunately a few gripes with Bendy and the Ink Machine. We played on Xbox One, and while we can forgive a few frame-rate dips and long loading times, we were really disappointed that we were locked out of the Archives chapter - unlocked after you finish the game to show concept art - because the loading screen wouldn't disappear, even if we could hear our character jumping and moving around.

That doesn't take away from the fact that not only is Bendy one of the most unique horror experiences we've played in recent memory, but it deploys its ideas so effectively that we always wanted to push forward to see what else it had to offer. A comparison with Bioshock can never be a bad thing either, especially when it comes to world-building, and even if it could do with a touch more polish, we'd recommend this for anyone, even younger gamers like those who helped popularise this game in the first place. After all, it is rated 12 and up, so as long as you can take the spooks you're in for a good ride.

Advertisements
Gamereactor UK
+
Pace is great, Nothing feels frustrated, Amazing world and atmosphere, Puzzles are varied, Creative concept, Art style is breath of fresh air.
-
Hard to hit some enemies, Frame-rate dips, Loading times, Optional chapter bugged out for us.
is our network score. What's yours? The network score is the average of every country's score

"Bendy is one of the most unique horror experiences we've played in recent memory."

Kindly Beast lays off most of its staff, and there were reportedly deep issues within the studio.

Creating a Monster: Bendy and the Ink Machine

We spoke to Mike Mood about the unique horror game and how its art-inspired characters came to life. 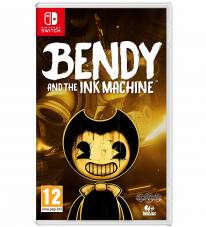