Back in 2010 we were treated to Hideki Kamiya's Bayonetta, from the man who brought us the Devil May Cry Series, and back then we loved the debut for the witch with attitude. Although it was inspired by Devil May Cry and the gameplay was similarly fluid, it introduced this amazing new protagonist, and Bayonetta was well-received across the board, so a sequel was always on the cards. And that's exactly what we got in 2014 with Bayonetta 2 as a Wii U exclusive (one which, once again, thoroughly enjoyed). Fast forward even further to 2018 and we have both of these games on Nintendo Switch while we wait for the third instalment, and with the physical version of the second you can a download code for the first, so it's the perfect time for both newbies to jump on board or for existing fans or revisit the series.

The story is pretty... unique in Bayonetta, as it's some sort of weird and twisted Japanese mix of Catholic Christianity with Heaven, Hell, and Purgatory. There's also a bunch of angels, demons, witches and demon hunters, as after all Bayonetta herself is a witch and over 500 years old, who gets some of her power from the Moon. She was born as a result of a forbidden love between a heavenly and an infernal creature, and that's pretty much all the sense we could get out of it.

The plot is admittedly fun to watch though, simply because of the way it's delivered. A wacky cast of characters creates a distinctive comedic feel, and the action during cutscenes is so breathtaking that at times it's best to just press pause and take five in order to avoid information overload to your brains. The story itself continues where the first one ended, and although there are nods to the original, you don't need to have played it to enjoy this sequel. Basically, another witch called Jeanne goes to Hell, and it's up to Bayonetta to save her.

Besides stellar action and a unique world, the thing people usually remember is Bayonetta herself, as she uses pistols attached to her high-heeled shoes and is the embodiment of an alpha female. Bayonetta is in control of her own destiny and fears no man or beast. Kicks are plentiful, as many times she dances around a pole with the camera regularly clinging to her body during intense action sequences, and while this has often been something to cause backlash in the public eye, perhaps this is different because Bayonetta is such a force to be reckoned with (plus it's so exaggerated and camp that it's not to be taken seriously).

Structurally, Bayonetta 2 isn't as coherent as the first game was. There weren't that many platforming sections to begin with, but now they're almost entirely absent, and gameplay is pretty much just running from one fight to another. It must be said though that it's amazing how varied these fights are, as anything can happen, and usually does. There's a handful of weapons to choose from, and different combo moves are even more plentiful. On normal difficulty you can survive by just hammering a few buttons at the right moments, but better players will learn their gameplay style to such a degree that it resembles a choreographed dance with the enemies.

There are almost no quiet sections, which makes longer play sessions a bit taxing. In other words, since the game doesn't want to give you a break, you'll need to press pause to escape the frantic chaos. Compared to the first Bayonetta, the tempo of battles is faster, which moves the focus to fast reflexes instead of watching your enemies' movement patterns and then acting accordingly. Some may prefer the slower fights in the original Bayonetta, due to the fact you can deploy a bit more strategy, although some may like the intensity offered here. Each to their own.

It takes around 10 hours or so to finish a Bayonetta game, but both titles have been designed in a way that it's impossible to see and use everything during your first playthrough. In order to do everything, be prepared to play the games through at least three times, but there are enough difficulty settings that those who just want to play the one time are also able to do just that with a challenge to suit.

Technically both games have aged with dignity, but you can see that they're older games. Invisible walls are everywhere, environments lack detail, and the linear corridor in which you move forward is quite tight. On the other hand, the colours are bright, animations are fluid, and the frame-rate is always fast enough, with short loading times that don't break the pace of the action. Remember though that both games are almost direct ports from Wii U to Switch, so don't expect many graphical improvements.

Sound design is on par with other aspects of the overall presentation, and a varied soundtrack always fits perfectly to what we're seeing. Hellena Taylor is marvellous as the voice of Bayonetta too, and her tone is always spot on for the situation at hand, being just as crazy and wild as the rest of the game (not to mention hilarious as well).

We recommend that you play both Bayonetta games with a big screen and a Pro Controller, because that's the way these games were originally designed to be played. On the other hand, the games work just fine in handheld mode, which is a bit surprising considering the fast pace of gameplay. You can also use the touchscreen by tapping the screen to move around and tapping enemies to attack, but although this works we don't see much of a point to playing them this way. Of course, you should also bear in mind that the epic apocalyptic mood isn't quite so impactful when playing on a small screen on your lap.

Aside from the story mode Bayonetta 2 also has Tag Climax, which is a selection of short fight challenges played either locally with a friend or online. There's also a matchmaking feature for those who don't have Bayonetta fans as friends, and if everything else fails, you can just play with a competent AI buddy. Tag Climax is a nice addition, but nowhere near as appealing as just playing the game for a second or a third time. After finishing the story there's also a sort of arena battle called Lost Chapters, which gets harder and harder as you progress.

Considering the Wii U wasn't the most popular console in the world, moving the franchise onto the Switch seems like a genius move for Bayonetta 1 + 2, as it gives a wider audience a chance to join the wicked witch on her high octane adventures, with a sequel that's just as iconic, wild, and crazy as the first game. Both titles have their shortcomings, sure, but there's a reason the witch has won the hearts of so many, and we can't wait to see more of Bayonetta.

Gamereactor UK
+
Controls, action, and aesthetics all as good as they were, Bayonetta is a great protagonist, Anything can (and will) happen, Lends itself well to multiple playthroughs, You can skip cutscenes, Works as a handheld game nicely.
-
Almost a straight port from Wii U to Switch, Graphics already a bit dated, Story is a tad messy, Fights can get a bit too fast in 2.
is our network score. What's yours? The network score is the average of every country's score

Join us as we check out both games on Nintendo Switch.

Watch some Bayonetta 1+2 exclusive gameplay on the Switch

We take on both games using Nintendo's hybrid system.

Nintendo costumes and other bonuses will be unlocked.

The announcement coincides with the second anniversary of Bayonetta 2. 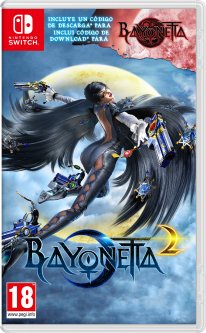