BattleTech is a very broad tactical experience. Each Career gives us different possibilities, whether it's the mechs encountered, the weapons obtained, or a lucky shot that saves you from a terrible loss. The game has received some bulky additional content before, including Urban Warfare, Flashpoint, and so forth. Now it has received another, this one titled Heavy Metal, which presents eight new mechs, several new weapon systems, and a new Flashpoint as well.

As the name suggests, Heavy Metal relies on a number of new mechs and weaponry. Those mechs are Flea, Rifleman, Archer, Assassin, Vulcan, Phoenix Hawk, Annihilator, and, of course, Bull Shark, a special mech that you can get through the Flashpoints. From a free update, you can also get two new mechs, namely Warhammer and Marauder. Meanwhile, there are several new weapons, such as the COIL Beam and the mortar, which we will discuss later.

First, let's talk about the new mechs. You can find all the new mechs on missions or via the market straightaway upon activating the DLC, except the Bull Shark. Flea has the highest mobility, giving you more options regarding light mechs in the beginning, even though we didn't use it much. Then there is the Rifleman which, as the name suggests, specialises in direct attacks. Meanwhile, Archer is a missile boat that can be relied on from a distance, but it is also deadly when on approach with its laser (and it was one of our mainstays across a number of missions). Archer has special equipment called the Missilery Suit that makes the missile attack more focused on one area, making it a great assault weapon able to do damage to heavy foes.

Assassin is one of the most mobile medium mechs in BattleTech and has special equipment that can ignore four enemy evasions, making it a very good light mech killer. Then there is Vulcan, which has CQC, dealing greater damage with melee attacks - a good brawler for the early to mid-game. Phoenix Hawk is another medium mech, this time with a high jump capability, making it good for flanking enemies. Then there is the Annihilator, which is a 100T assault mech with heavy weaponry, but it gets hot very fast.

Now, let's talk about the most special mech in the Heavy Metal DLC: the Bull Shark. It's a LosTech mech from the Star League era, and it has a huge number of weapon hard points but also produces astronomical heat. To get it, you have to follow a series of special green Flashpoints (this seems to be the special Flashpoint colour for Heavy Metal) that require a lot of in-game time to get done. Every time you finish a Flashpoint, you will be asked to run some contracts and kill some time before you got another, so you have to be patient if you want to get it.

In fact, this Flashpoint feels like a mini-campaign, where you will meet some legendary mercenaries, one of which is Black Widow. You also have the option to face it directly, even though the crew seems reluctant to do so. A piece of advice, all of these Flashpoints are located in the Periphery, you know, the black region in the middle. So if you don't want to travel far, it is best not to stray too close to the other side of the map.

Returning to the Bull Shark: with so much heavy weaponry on its shoulders (plus a special mortar that has two ammo), it is capable of dealing damage of more than 500, the highest we have seen so far (please correct us if we're wrong though). However, the heat production exceeds the sinking, so you most likely will not be able to make frequent alpha strikes. Thus we tried to tinker a bit by replacing some of the default weapons with their rarer versions (up to +++) to deal more damage so that we could instead remove several weapons and install more heat sinks or exchangers. The result is now our heat management is at three bars and the damage slightly decreased to 470s. Still deadly in our opinion, and it still has that mortar.

Speaking of mortars, this is a new addition for Heavy Metal. Mortars that are sold via the market only have one ammo (apart from Bull Shark's), meaning that it can only be used once in any given level. With this weapon, you can damage an area (AoE) and hit all the units there, with 10-50 damage on each. This weapon is good for fighting against closely-placed groups of enemies and those that are still not directly visible (only on radar), and because it attacks all parts of the mechs, the rear armour will be hit too. This is great if combined with more mobile mechs that are able to attack from the rear, especially if you meet some deadly assault mechs.

Now we head to the COIL Beam. This weapon has a special damage calculation, where the damage is multiplied by the evasion of the unit (but has no effect if the mech jumps). So the further it goes, the stronger the attack from the weapon. That way, mechs that are suited to using the COIL Beam tend to come from the light and medium categories.

Flea is a mech exemplified by developer Harebrained Schemes as a good COIL Beam user. However, we tried to use Assassin, one of the fastest medium mechs. This weapon is very effective in open areas where you do not have to pass through forests, bodies of water, or any terrain that disturbs your speed. That said, the mech that is using it is also at a greater risk of attack, so make sure you position that unit as carefully as possible. On the whole, however, it deals big, focused damage, which is very dangerous when combined with high mobility.

So is Heavy Metal worth it? This DLC has a quite long series of Flashpoints, where you will meet two legendary characters drawn from BattleTech lore, plus a super-mech. In terms of weapons, the mortar gives a new option to fight enemies at a safe distance or those which are protected by ECM, while the COIL Beam makes the light and medium mechs that feel so irrelevant at the end of the game feel interesting again, especially when doing Flashpoints with certain tonnage requirements. The new mechs also added fresh choices, especially playing as Assassin, Archer, and Bull Shark.

The new content in Heavy Metal has been smoothly integrated into various aspects of the game, whether you are starting a new career or further in around the mid to end-game. The new Flashpoints can be accessed by those who are ready to tackle missions with a challenge level of two to three, with the difficulty increasing afterwards. It is also available indefinitely, unlike other Flashpoints, so you can prepare yourself better to deal with it.

Although it's on the expensive side, with lots of well-implemented content, for those of you who have fallen in love with BattleTech and want something more, Heavy Metal is the way to go.

Gamereactor UK
+
An interesting series of Flashpoints, new strategies from new weapons, the Battle Shark.
-
Doesn't change the game as much as Urban Warfare or Flashpoint with the same price.
is our network score. What's yours? The network score is the average of every country's score

"With lots of well-implemented content, for those of you who have fallen in love with BattleTech and want something more, Heavy Metal is the way to go."

"The mercenary life and its constant decision making, money issues, and tactical battles kept us nailed to our seat for hours on end."

BattleTech gets a release date

And it's landing on PC in April.

BattleTech set to launch in April

BattleTech's release date pushed back to 2018

But the backer beta is being updated.

Co-founder of the studio also went into detail on the combat mechanics.

Harebrained Schemes runs us through how to play the game. 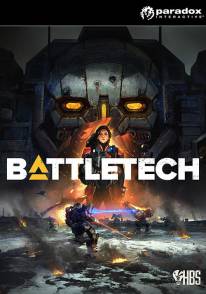