We weren't the biggest fans of Batman: The Telltale Series. In addition to numerous technical issues, Telltale's first game in the Batman universe took a number of creative liberties that we simply didn't buy into. The way it represented Thomas Wayne and Vicki Vale, in particular, was so out of character, so far from the source material and the ideas behind those characters, that we just had a hard time going along with them. On top of that, the story had some pacing issues, and several events seemed forced, to say the least. Still, we appreciated how it represented Bruce Wayne and some of his relationships, specifically with Selina Kyle/Catwoman.

Telltale is once again given creative freedom to play with several characters, but in an interesting way and without completely disregarding their respective legacies in the comic book. This is a new story, not directly linked to the first game, but there are many references, and several choices carry over into the sequel. As such, it's not mandatory to have played the first game to enjoy this one, although it is highly recommended. Telltale even allows you to carry saves between different devices, and you can even create a new save by taking some of the most important decisions in a recap of the first game. If you don't choose one of these options you'll begin Batman: The Enemy Within with a default save created by Telltale.

Batman: The Enemy Within is very much a Telltale game. It has an episodic format of five chapters (all already available), it's sparse in terms of direct gameplay, and is largely based around narrative-driven decisions that the player has to make, and several quick-time events indicated on the screen. It's also a game technically inferior to what you might consider the current norm, although we noticed small graphical improvements over the first game. As for technical issues and bugs, we only found one worthy of being mentioned; at one point in the second episode we shared an elevator ride with several characters. In this sequence the camera and all of the characters froze, although the dialogue continued. When the scene in the elevator ended, the game resumed normally, and we didn't have any similar problem afterwards.

We've heard horror stories regarding the first game, including bugs that prevented players from continuing the story, among others. Considering Telltale's past, we won't go as far as to say that this won't happen to you in this sequel, but the truth is that we only really noticed that elevator problem. Aside from that, the gaming experience progressed without any remarkable problems, and we hope you have a similarly solid experience.

The big villain featured in the first episode is Riddler, and he has, in fact, a big role to play throughout the game, but you will be interacting with several villains from what's an extensive rogues' gallery. We won't got into many specifics, but we can at least highlight "John Doe" (Joker), Harley Quinn, and Amanda Waller, head of the Agency and eventual creator of the Suicide Squad. These three characters are responsible for some moments of great intensity and doubt, particularly for Bruce Wayne, but there are others.

As in the first game, Wayne ends up playing a more prominent role than Batman himself, and balancing both worlds of the character is difficult. If you believe in the version of Batman that never compromises regardless of the situation, well, you're going to have to deal with some extremely tricky choices. It is certainly possible to maintain that state of mind, but it's very debatable whether maintaining that attitude is the most correct or justified course of action. There are also situations where you have to choose between the greater good and the well-being of important characters, and the point is that there isn't always a right choice, since there can be serious albeit different consequences depending on what you choose.

We also liked the pace of this second season. There are more action scenes, and although the player's interaction is limited to taking small choices during combat, and complying with the QTEs when they pop up, their placement and the technical performance when watching your choices play out keeps the action exhilarating. There's less political and mob related content, and the game focuses more on the villains, forcing Bruce and the player into some situations where his principles and morality will be heavily tested.

Each episode lasts around one and a half to two hours, but more important than counting the minutes, we felt that the overall experience was the right length, and ultimately we think Batman: The Enemy Within justifies the €30 / £25 the full season demands (that's the console price, it's cheaper on other platforms). It is also worth mentioning that, depending on the decisions you make, you can see completely different sequences and events. We have encountered some Telltale games where, regardless of the decisions you make, the narrative always found a way to follow a similar path, bur that is not the case here. Players who make different decisions will have quite a different experience, and this also adds to the longevity of the game if you wish to see the results of alternate choices.

Batman: The Enemy Within is a memorable Bruce Wayne and Batman adventure, and also one of the most challenging stories the character has had to go through. This depends of course on your connection to the universe and characters, but if you're a fan of the Dark Knight, it's well worth taking part in this Telltale story. It suffers from many of the problems endured by most Telltale games, but like those, it also has the capacity to surprise and to some extent, emotionally drain the player.

Gamereactor UK
+
Creative freedom is more satisfying than in the first game. Good overall rhythm. Some tough decisions with massive consequences.
-
Graphically it's still bellow par. Some forced situations. A few inconsistencies.
is our network score. What's yours? The network score is the average of every country's score

Batman: The Enemy Within - Episode 1

"The way Telltale deals with Batman's alter-ego is quite interesting, and more credible than we're used to seeing."

This month's free Games with Gold have been revealed

Here are the four games Xbox Live Gold subscribers can download for free in the month of March.

Batman: The Enemy Within episode 4 gets release date

Is Harley Quinn about to expose Bruce Wayne's secret to the world?

Real dead body spotted in Batman: The Enemy Within Ep. 2

The Russian ambassador killed in Turkey has since been removed from the game.

We talk to Batman: The Enemy Within's Joker

Episode two of Telltale's Batman: The Enemy Within has launched.

New trailer for episode 2 of Batman: The Enemy Within

"The Pact" will be released on October 3.

Batman: The Enemy Within 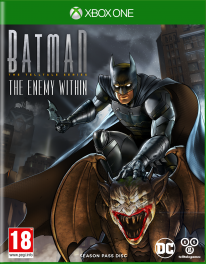