Earlier this month Axiom Verge's producer Dan Adelman took to Twitter to reveal new claims about the relationship with Badland Games to produce a physical version of the game, explaining in detail how he believes the company "ripped us (me and Tom Happ) off."

"Badland made us an offer we couldn't refuse. In addition to matching what other publishers were offering in terms of rev share, they said they'd contribute 75% of their cut to a trust fund set up for Alastair Happ's ongoing medical expenses," he explained. Adelman also added that Alastair - Tom's son - had a neurological disorder called Kernicterus and that Badlands' CEO Luis Quintans seemed sympathetic to it.

"Everything seemed to be going well until it came time to spend the $ to manufacture the discs and cartridges," he continued. "They kept stalling, and it didn't take long for us to figure out they were running low on funds. Badland proposed that we finance the manufacture of all of the units, and they would repay us once everything was shipped to the retailers, who would pay for the inventory upon delivery. This sent my spidey-sense tingling so I insisted retailers pay Tom directly instead."

Adelman goes on to claim that Limited Run Games (involved with North America publishing) paid Badland $78,000 USD in advance, with Badland supposed to be using those funds to manufacture the Wii U games. He also added that LRG has been "great allies" in this process.

"When it came time to pay Tom Happ his share for EU sales & contribute to Alastair's health care fund (which Tom had to pay a lawyer to establish), Badland went dark on us. We didn't even really know how much they owed us, though we have reason to believe it's about $200k," a later tweet reads.

While Adelman still sees the silver lining in the formation of Leadman Games due to his experience in NA retail publishing, he explains that "we've filed a lawsuit against them, but because of the international nature of the suit, it's proving hard to make headway."

Recently, however, Quintans has responded on Twitter to address the reports, saying:

"I understand that, due to the extreme situation we were going through, our way of doing things has not been ideal, and I am sorry for the damages this has caused to the parties involved, but I want to reiterate that I am still willing to reach out and assume the payment of the debt, which I have never refused, to avoid further damage to companies and people involved in this situation."

"Due to the seriousness of some of the accusations that have been made in relation to this issue, I have been forced to put this matter in the hands of my lawyers, who reserve the right to take legal action against anyone who might make public inaccurate or false information harmful to the interest of the company in which I now work, BadLand Publishing, or my own."

Yesterday Badland also provided another press release to address the ongoing reports on the matter, claiming that "neither Badland Games nor Luis Quintans have NEVER made any kind of profit from the sale of the game Axiom Verge."

"Both Badland Games and Luis Quintans have recognized at all times the existing debt with Limited Run Games and Tom Happ Games. They have repeatedly contacted them, attempting to resolve the debt, taking the initiative to reach out-of-court payment agreements to which either no response has ever been received or which were never accepted. The only answer is the filing of a lawsuit in the United States in which no execution took place in Spain."

"It is suspected that all this is part of a defamation campaign that seeks to promote third parties to the detriment of our interests, something that is evident if we take into account the suspicious closeness with the launch of the title."

Axiom Verge: Multiverse Edition on Wii U will be available via Limited Run Games on March 29.

It seems as if we won't see the end of this situation for a while, especially with the lawsuit Adelman is launching, so time will tell what happens here. As per usual, stay tuned to Gamereactor as we update you what happens.

"Though the game looks and feels old fashioned, there is enough here to keep you from drowning in nostalgia."

Producer Dan Adelman launched a lawsuit last week, and both Badland and CEO Luis Quintans have spoken out about the situation.

It turns out that developer Tom Happ had deleted all Steam files but accidentally deleted one for a steam sound effect in-game.

Axiom Verge is getting a boxed release

BadLand Games will be handling the distribution.

The Wii U version of Axiom Verge has been dated

And there's not too long to wait.

Axiom Verge on PS Vita finally gets a release date

Due out on April 19 for lusting Vita owners.

Axiom Verge is coming to Xbox One and Wii U

The wait will soon be over, even for Vita players. 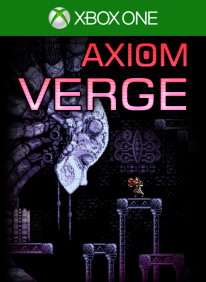