It's hard writing the words "the end" when talking about a cinematic saga that, for over a decade, has enthralled millions and become a cultural phenomenon. The Russo brothers know that and despite having strong backs after having directed three films in the Marvel Cinematic Universe - including Avengers: Infinity War, a prelude to this final movie - to end a narrative journey twenty-two films long is a risk that few would have willingly taken. Pulling the strings of over twenty movies, having their characters and their stories intertwine, but above all bringing together the different voices and their unique visions (Jon Favreau, Joss Whedon, James Gunn, Kenneth Branagh, Anna Boden - to name but a few) without them colliding with each other, instead making sure that they became an exciting, fluid whole, was undoubtedly one of the most difficult, but at the same time rewarding, challenges that contemporary cinema has faced.

Yes, we want to take the risk and talk about "cinema" in the broader sense because there's no doubt that the operation orchestrated by Marvel Studios over the last two decades is pretty much unique, one that has forced a radical transformation in terms of the structure of the genre as we have known it until now. From Iron Man (2008) to Avengers: Endgame many things have changed. And we're not only talking about stories that alternate with each other, heroes who feed an unprecedented multiverse (sorry DC, there's no comparison!), but the genre itself - the "cinecomic" - which has evolved significantly, going from being something that, in the beginning at least, focused on creating a spectacle and on extraordinary heroes, to become a mature genre, characterised by deep stories and the strong personalities of several characters who have populated that world, showing their more human and vulnerable sides along the way.

Endgame starts and ends right there, no longer telling the stories of superheroes, but rather of men and women who have fallen victim to the transience of life, of an enemy who even by his name, Thanos, echoes pain and suffering. These are defeated heroes, despite their powers, and for them it is permissible, now that they have lost everything, to abandon themselves to the fragility that they have always tried to leave behind, hidden behind their masks, their armour, and their powers. It's here that we see a total change when compared to the early stages of the saga, and indeed the whole genre, which by now is mature enough to stand on its own legs and is capable of sustaining reworked ideas, experimentation with theme, and sometimes even failure (because not all Marvel films have been successful, after all).

"Epic" is perhaps the adjective that best defines the nature of Avengers: Endgame, and we're
talking about that word's literal meaning: a poetic narration of heroic deeds. Because, after all, what has been built over these past years, first via the comic books and then via the film series, has the same shape and substance as an epic poem, creating an unprecedented contemporary mythology, a choral narration that unfolds through different media and that, in this final film, comes to an extraordinary conclusion. It's a pulsating ending, one that's in a continuous state of transformation, which leads us by the hand towards what could be its one and only ending. Because, despite all the possible hypotheses and forecasts, we could never have imagined anything else.

Endgame is a compendium of the different souls who have forged the Marvel Cinematic Universe over the years, not only gathering around them the entire cast of characters that have built and characterised this spectacular universe, but above all in the different rhythms that the film is able to dance to across its more than 180 minutes. The lightness in some jokes, designed to defuse the anguish that oppresses the protagonists, alternates with devastating dramatic moments, but this is all part of a perfectly composed symphony, one that has been brought to life with a perfect and unexpected sense of balance. Avengers: Endgame is a flow of emotions from which it's impossible not to be overwhelmed, where fan service - which has always looked to and pushes the cinematic imagery taken from comics - is married with quality, leaving us with a colossal movie that also has the liveliness and awareness of contemporary cinema. It's self-conscious, sometimes self-referential, but at the same time extraordinarily bold.

Packaged as a blockbuster but with the soul of an epic poem, Avengers: Endgame is the conclusion of an unexpected journey, the closure of a circle that started with a joke ("I am Iron-Man") that officially paved the way for a new frontier of fantastic cinema, transforming it from within and giving us one of the most incredible cinematic dynasties ever created. With a massive script - brilliantly written by Christopher Markus and Stephen McFeel - able to bring together the various narrative threads without them becoming entangled, as well as masterful performances by a diversified but absolutely coherent cast, Endgame drops the curtain on one of the most radical and overwhelming mass entertainment phenomena, setting itself as the last unforgettable act of an unprecedented narrative cycle, one that, after seeing the credits roll for the very last time, we've already started to miss.

MOVIE REVIEW. Written by Fabrizia Malgieri on the 26th of April 2019 at 16

With the cinematic saga coming to an end, here's our spoiler-free assessment of the Russo's crowning achievement. 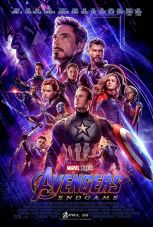