Koei Tecmo has revealed some brand new details about their upcoming game Attack on Titan 2: Final Battle, which follows the third series of the anime of the same name. This is coming on July 25 for PC, PS4, Switch, and Xbox One, and the new Character Episode mode includes Parts 1 and 2 of the show's third season.

In this game the Titans aren't the only enemies you'll have to face, as the Anti-Personnel Control Squad is looking to capture Eren and Historia, meaning the Scout Regiment has to defend their teammates.

The Scout Regiment, however, is just one of the viewpoints of the game, and we'll also get to experience the 104th Cadets and the Warriors, with a focus on Reiner, Bertholdt, and Zeke. There will even be extra plot points not seen in the show, providing extra context for characters.

Those who buy the game on PS4 or Xbox One in the first month of launch will get the Queen of Historia outfit for Christia, the Young Male Coat for Kenny, Plain Clothes (Underground City) for Levi, and a One-Piece Dress for Mikasa.

PS4 players also get early access to playable characters Kenny and Zeke if they purchase within the same period, while Xbox One players who pre-order on Xbox One can unlock these two early. Pre-orders on Nintendo Switch, however, are coming in the next few weeks.

You can watch a brand new trailer for the game right here. Is this game sounding appealing for you Attack on Titan fans?

This gives a new take on the characters from the show's third season, and we can start enjoying this from July 25. 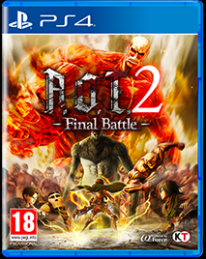