Mundfish astonishingly beautiful mix of Bioshock, Fallout and Doom will actually make its release date this time around.

The upcoming Atomic Heart seems like a Soviet take on the Bioshock concept, in which we play as a KGB agent in an alternate future. But the developer Mundfish is Russian,...

A lot of combat and exploration was shown off.

Atomic Heart DLC is Already in the Works

The game will have four single-player add-ons.

Mundfish has shown us what the game looks like when run on a superpowered PC.

And they are as stunning as always.

Following a previous report, the date has been locked in alongside a new trailer.

It seems like Mundfish and Focus Entertainment has slapped an exact date on the FPS title.

But at least it finally has a publisher.

The mix of Bioshock, Crysis and Fallout still looks amazing, but don't expect it this fall after all.

Atomic Heart has taken over 630,000 man-hours to develop

The development team has grown to 120 people over the past five years.

Atomic Heart will take around 20 hours to beat

Mundfish: "Even more, if you want to do all the side activities."

Atomic Heart does not have microtransactions or NFTs 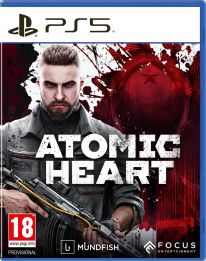