If the name Atelier doesn't ring a bell when you hear it, that's because it simply isn't as popular as the genre heavyweights. However, the Atelier series actually enjoyed its debut on consoles back in 1997. This means it's about to turn 20 years old, thus it's joining other major long-running JRPG series that have made it oversees (such as Tales Of or Final Fantasy) as an industry elder. From that longevity it's simple enough to extrapolate that there's plenty of charm here. And let's say it; a few years ago it was much trickier for an RPG with so much Japanese flavour to make it to the West, not to mention enjoying success or to keep getting regularly iterated upon after it got here. But Atelier and its unique branching formula managed to convince fans way before manga-styled games became as popular as they are today, and here we are again.

If you've never played an Atelier game, the first thing you need to know is that the protagonist of every single game is always a young alchemy-loving woman who's in some kind of distress. Roughly speaking, that's the starting point for the storyline in every single entry in the franchise. It might sound repetitive or even trivial, but it's actually surprisingly appealing and adds some cohesiveness to a game that still wants to be different from the rest.

Thus, Sophie follows suit. She's the new alchemist, a bit of a scatterbrain, and messy to boot, but she wants to improve her abilities. However, this is just the beginning of her story and there's much more to come. With Atelier Sophie a new saga is born, and as is typically the case, there's three games per sub-saga, so we can expect a third chapter to complete the story arc after the already-announced second entry, Atelier Firis: The Alchemist of the Mysterious Journey.

First steps are pretty idyllic and relaxing, despite Sophie Neuenmuller not being the outstanding alchemy student she'd like to be. That's where friendship, a recurring key element in the Atelier series (it's at times even more important than the main storyline), comes into play. Even if Sophie is somewhat clumsy when it comes to alchemy, she won't hesitate or spare any effort when helping out her friends, even if that means more hard work or even danger for her.

And this time around one of these friends is central to the plot and very much a mystery. Sophie's grandmother's alchemy book, which starts off a disappointment (it's full of blank pages with no magic recipes), turns out to be a talking, living character. The book is called Plachta, and even if she has lost some of her memories, she comes in handy and is very knowledgeable, and she's happy to offer up advice along with some cool recipes to help Sophie grow as an alchemist... as long as our protagonist helps the book out with her mysterious problems. And thus the adventure begins.

Gameplay-wise, the main feature of the game is of course the alchemy system. Every time you face the cauldron, you need to have the required ingredients at hand and know how to combine them properly. That is, besides completing some sort of challenging Tetris-like mini-game, if you are to boost its special effects. The alchemy system is perhaps the one feature that benefited from having the most effort and care invested in it. It adds depth, which is welcome given this is where you'll spend much of your time.

Talking about ingredients, you of course have to find and collect them before attempting alchemy. Each recipe requires specific ingredients of varying quantities, so there's some trekking about involved, including side-missions. But beware: the game uses a day/night cycle, on top of a five-day week system (with two of them acting as days off at the weekend), both of which impact item and mission availability. Besides, the environment changes accordingly, with characters that only appear at certain times, and the atmosphere shifting between working days and holidays.

Mission-wise, this has an impact not only on the side-content, but also on several of the main story quests. And to be honest, perhaps the game depends too much on these variables. So much that at times, when you want to progress with the main quest, you might instead spend your time dealing with these time-based cycles until you know what to do and when to do it.

Let's not forget that this is a JRPG. Besides helping Plachta and item-collecting along the way, and on top of the entertainment drawn from the alchemy linked to these activities, another aspect you'll invest a few hours into is the combat. As is usual in the genre, this is a classic turn-based system, with four characters in the party forming a diamond: vanguard at front, two side characters in the middle, and our resident alchemist at the back. New here is that every character may use items, but only Sophie has access to the complete inventory as she battles against various fantasy creatures.

The tricky thing in terms of combat is finding the best and most balanced difficulty level. Easy and Normal are a touch too forgiving, so jumping to Difficult would seem only natural. However, this makes some battles too demanding and you might get stuck more often than you'd like, at least until, thanks to your alchemy skills, you get access to more powerful items.

Though good intentions of the developers might not be enough at times. Gust is delivering a new Atelier, and in it you can see that they're eager to innovate and freshen up the franchise, while at the same time staying true to certain elements. New features, such as the improved alchemy system, some enhancements to combat, and the removal of a time limit for main quest completion, are all really welcome.

That said, as you play and progress, it also becomes clear that the innovation doesn't go as far as we'd have liked. At first sight you can see that the visuals are way behind those desired on PS4 - it looks more like a remastered PS3 game. Difficulty and balancing are also things to be improved upon in the future, as this can go from being extremely tough to a walk in the park. And the combat system, besides some nice new features, ends up below what we've seen in previous entries. And that's not mentioning a selection of missions which aren't clear at all, where we had to find help on the Internet in order to progress.

That's not to say that this is bad. As well as the cool additions, we found Japanese voice acting (along with English) that offered plenty of fan service, a fine soundtrack, and the always charming Atelier characters. And let's not forget some environments that, despite being a bit empty, transported us to a European medieval fantasy world. The trademark soul of the series is still there, and fans of Atelier will be relatively comfortable with it.

So, we'd like to think of this as an evolution, an alchemy experiment that mixes the old with the new. Perhaps the beginning of a major change in the series that will follow afterwards, with the good and bad that this implies. Thus, we expect much more from the next Sophie entry if Gust manages to implement all of the new features properly. For now, there's clear room for improvement.

Gamereactor UK
+
Improved Alchemy System. Japanese and English VA. Great soundtrack.
-
Too confusing at times: not too clear where to go or what to do. Underwhelming graphics for PS4. Uneven difficulty. Combat system not as good as in previous instalments.
is our network score. What's yours? The network score is the average of every country's score

Atelier Sophie: The Alchemist of the Mysterious Book

"We'd like to think of this as an evolution, an alchemy experiment that mixes the old with the new."

Two JRPGs for you to enjoy.

The new Atelier title confirmed for western release on PS4

Atelier Sophie: The Alchemist of the Mysterious Book heading to PlayStation 4 in June.

Atelier Sophie: The Alchemist of the Mysterious Book 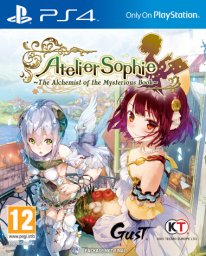