The next-generation of gaming is here and for Sony and the PlayStation 5 that all begins with little Astro causing a ruckus inside your brand-new device. The title, Astro's Playroom is part of the PS5 launch bundle, as it comes with the system installed on its drive. I've played through the first level, the Cooling Springs Stage, and considering the main point of this game is to make users comfortable with the DualSense's new abilities, Astro's Playroom is shaping up to be an absolute smash hit.

You start the level at the top of a giant slide, looking out at the extent of the Cooling Springs beach landscape. As you move down this slide, the DualSense starts to rumble aggressively, but not in a way I've experienced before - this is because of the haptic feedback that turns the simple controller feeling into an actual gameplay experience. I walked around this beach picking up coins, defeating the cutesy enemies with Astro's powerful backhand, and being a nuisance to the Astro Bot beachgoers, all whilst exploring the new ways the DualSense controller enhances gameplay.

From the beachfront, I headed toward a sandstorm swirling at the base of a towering structure, the PlayStation 5; it was the cooling fans that were causing the chaos, and I, in Astro's shoes, decided to head right in.

I moved into an indoor pool, where plenty more bots were lounging and making a splash, before jumping into a strange zipped suit, that required me to use the touchpad to zip-up. This moved on to the next area where the controller's adaptive triggers came into effect, asking me to use different amounts of force for a varied outcome. The concept was simple: use the suit, which resembled a frog with a spring for legs to make it across a 2.5D level - the adaptive triggers determined how much kick the spring would give out. The level design mainly asked me to jump between platforms or break some glass as I moved up the level towards the next stage.

Back as regular Astro, the next area had a frosty theme and featured Astro styled penguins that waddle around in this colder pool level. Here, a new mechanic was introduced, one that asked me to account for sliding while moving over the icy platforms. On the ice, Astro would ice skate with his hands behind his back, and quite frankly, it looked adorable. It was unfortunate this section ended so briefly because all of a sudden I was heading down another slide onto a chilly flowing river.

During this section, I started on an iceberg with an umbrella fan attached to the back, floating on a river in the PlayStation 5's icy insides. The goal was to use the microphone in the DualSense controller to blow the fan to action, giving the iceberg enough thrust to start gliding down the river. I had to defeat a few more enemies whilst jumping between icebergs, to make it to the end, where another bout with the zipped frog-like suit was waiting for me.

This ended up being much the same as last time, except a little shorter in length and led to the final stage of the Cooling Springs experience, a PS5 rooftop pool party, where Astro could enjoy the luxury of the environment, or alternatively just crack on with finishing the level. Completing the level, entailed pulling a bunch of loose cables out of the ground, to spawn a gift that I won't mention to prevent spoilers, this then took me out of the Cooling Springs, ending the first level.

For me, this part of the Astro's Playroom experience was more special than I anticipated. This title was geared up as an introduction to the DualSense, and whilst it accomplished that, Astro's Playroom is seemingly also a very competent, fun user-friendly game. I can't wait to dive back in and complete the title, but before that, it's important to note how DualSense's integration with the game is already setting the standard for the next generation of controllers.

To me, this 15-minute experience is proving that controllers are no longer just about comfort and feel in the hand. Now they are also about further interaction with games, providing a new medium to connect with the characters and storyline. Astro's Playroom Cooling Springs level shows that with the right integration, adaptive triggers, a touchpad, haptic feedback, and a microphone can bring to life a simple title and turn it into a truly unheard of experience.

Whether or not I'm still blinded by the glitzy demeanor of a brand new console, this title was fun from the instant I started it, and now that I think about it, Astro might just be my new favourite PlayStation character.

Don't be fooled by it's free status - this is one fine platformer.

Fans will be able to stream the soundtrack on platforms such as Spotify and Apple Music.

We've interviewed Kenneth CM Young again to celebrate the occasion and learned about the origins of the GPU song, working during the pandemic, getting a PS5 devkit and more.

Have a romp around the PlayStation 5's icy cooling systems in the shoes of Astro. 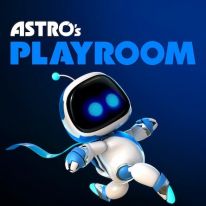