Although it doesn't always look that way, PSVR is slowly and quietly becoming a minor success for Sony. Now, with the help of some cutesy robots, another exclusive hit now lands to broaden the appeal of virtual reality on PlayStation 4.

Although some have already written off VR as a flash in the pan, the PSVR is constantly evolving. With three million units sold, it has further extended its lead over its two main competitors among the major head-mounted displays, HTC Vive and Oculus Rift. But as far as first-party support goes there was fair criticism directed at Sony because after the first wave of promising titles there were hardly any titles of note. But this drought is over now because with Astro Bot Rescue Mission Sony's Japan Studio has shown just how much creativity they can beam into a white plastic headset.

Sony has listened to its fans, because Astro Bot Rescue Mission is the full version of the sweetest appetiser from Playroom VR, itself a small collection of games that was made available free of charge at the launch of the PSVR. Even then, a brilliantly polished white mechanoid, reminiscent of Sony's real-life Aibo robots, collected its lost colleagues in an idyllic grassy landscape.

The reason for this mini-game is now explained in this new intro sequence: 160 of the cute robots were on their way through space when they were attacked by an ill-tempered and slimy alien. The creep had it in for the huge VR goggles that the ship had mounted on its bow and tore the space vehicle apart. Its occupants were then spread across five different nearby planets.

The missing robots must, therefore, be reached by the last remaining crew member (under the direction of the player) in an adventure where breakneck bouncing and fighting skills are required. As with the VR hit Moss, we control the main character with a controller, but sometimes we also see ourselves on displays mounted in the landscape or in reflective surfaces as an oversized being responsible for the fate of the small droids on-screen.

As we know from the Playroom version, we're now getting down to business. We begin again in a dreamy meadow landscape with the search for our robotic colleagues. However, this world has grown considerably in Astro Bot Rescue Mission. It stretches both upwards and outwards and contains numerous hiding places for robots, as well as gold coins to be collected (which alternatively become valuable giant coins or are stashed in colourful containers).

In order to reach them, our robot can jump, hover briefly using jet propulsion, strike, and execute a vortex attack. The latter is quite useful against the many opponents you encounter. However, the most elegant way to get rid of these pests is to roast them with the flames from your jet engine while gliding overhead. As with any platforming title, perfect timing is required. The game offers the usual challenges of moving and rotating platforms, falling or breaking blocks, fire, lava, and deadly spikes.

Astro Bot Rescue Mission doesn't reinvent the wheel, then. Many elements are reminiscent of Super Mario or Rayman, but the special thing is how these elements are explored. Above all, it's the integration of VR that gives the game its own unique charm, because the player is physically involved in the action, with your head serving as the "camera" of the game. If the Astro Bot is hidden behind a corner, you have to lean forward to see it, for example. In general, actively moving and looking around is an essential part of the game if you want to find all the bots and the almost invisible chameleons hidden in each level.

In some situations, it can even be helpful to stand up or bend down to get a better view of what is happening. Even evasive movements of the head are sometimes required if you want to prevent slime or splinters from obstructing your view or, in rare cases, even threatening a hit that results in a return to a previous checkpoint. You'll need good timing with both your head and your hands if you're to clear obstacles or opponents out of the way.

Special equipment boxes also involve the DualShock 4, with new features sometimes requiring a time-critical interaction between directing the Astro Bots and the motion controls of the DS4. The developer has really come up with a lot of amazing ideas and interactions, and experiencing them for yourself is one of the game's great pleasures (which is why we want to be careful with regards to spoilers).

In any case, the game offers a big bag of variety, even if you get used to some of the mechanics and tricks over time. There are chameleons to find in later levels for those players who find the whole experience a little too easy. If you find these barely visible creatures and expose them by staring at them, they unlock challenge levels that offer new, particularly tricky tasks. For each of the 20 levels, there is one such challenge, plus rematches with the five original bosses.

As a little bonus, you can also visit the Astro Bot spaceship, where all the bots you've saved are able to enjoy their lives, including the rare silver and gold models which can be won via the challenges. Collected gold coins can be exchanged for capsules containing playsets, and with them, you can then resurrect elements of the individual worlds in the spaceship and fool around with them in safety. These are not really core to the experience, but they're amusing and the ingenuity of the developers is there to be celebrated once again.

Most of the time we've had to finish our PSVR reviews with a little bit of moaning, writing that the games are great but with the caveat that they only offer a small taste of something bigger. That's not the case with Astro Bot Rescue Mission. In order to play through the five worlds and take on a range of side distractions, you will be kept busy for ten hours or more. Completing everything (including the challenges) will surely require the same amount of time again.

With all the great and creative ideas, Astro Bot leaves almost nothing to be desired. The graphics are spotless with ingenious textures that offer a very impressive demonstration of what's possible with Sony's headset. Because the magic word for all headsets is "antialiasing" - and this edge-smoothing is so clean on the PS4 Pro with Astro Bot Rescue Mission, it approaches the overall image quality you'd normally see on the Vive and Rift respectively. Thus, apart from the wish that always comes with a great game - you know, the one where you always want more - only a slight criticism of the music remains. It's great, but compared to the rest of the game, there aren't enough tracks and while remixed for new areas they don't always fit with the world in question. A bit more variety would have been nicer.

All in all, though, Astro Bot Rescue Mission is a really great experience that offers an impressive showcase of what PlayStation VR is capable of. Together with Resident Evil 7, Wipeout Omega Collection, and Moss, it's currently on the podium in terms of must-haves for PSVR.

"A really great experience that offers an impressive showcase of what PlayStation VR is capable of." 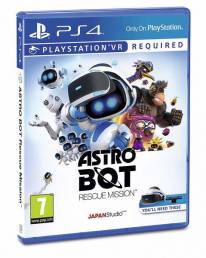