One who fights monsters must make sure they don't become a monster themselves - rather they should catch said monster, store it in a small ball, and then force it to fight for you. That's clearly the better option, especially when the monster in question can fly and carry a heavy load. And no, we're not talking about Pokémon Sword/Shield here, rather we're describing Astral Chain - a Switch-exclusive that has most likely passed a lot of potential fans by, but despite not knowing much about it going in, it's a game that we're glad we didn't miss.

Astral Chain is the fruit of the ongoing collaboration between PlatinumGames and Nintendo, a collaboration that has spawned a lot of innovative titles throughout the years but, it's fair to say, also some disappointments. Bayonetta 2, for example, was released to acclaim while Star Fox Zero flopped and the innovative but inaccessible The Wonderful 101, like most of the console's other titles, went to ruin with the financial collapse of the Wii U. At the same time, Astral Chain is PlatinumGames' first major release since the acclaimed Nier: Automata, so the studio has a lot to live up to.

Astral Chain is rooted in a fundamentally complex concept whereby you're managing two characters at the same time. Not in a turn-based alternating fashion like in Grand Theft Auto V, but simultaneously and on the same screen in a game that's full of action, explosions and attacking combinations. It's no easy task, but Platinum has always experimented with unorthodox and innovative game mechanics (or cramp-inducing control schemes that put player dexterity to the test).

Astral Chain has a recognisable feel to it. You'll note the camera sensitivity, the control style and the movement that you'll find in the studio's other titles. The combat system, of course, forms an important part of the experience, with extra emphasis placed on various attack combinations, enemy-locked camera angles, and opportune dodge moves that slow the pace and open things up for strong counterattacks. In the quieter moments in the game, you'll run around in limited sandbox environments or linear corridors, buy medical supplies from merchants, find materials on the ground and so on. So far, so good.

The most interesting feature is hiding behind the left bumper. With it, you can call a 'legion' to the battle. These are inter-dimensional beings that are physically connected to, but distinctively different in character and behaviour, from the player-character. You can give your legion unrestricted orders, activate various special abilities, let it attack on its own or, if you hold the bumper down, assume direct control of the being via the right control stick. At first, the whole thing seems mildly obscure, but as time goes on, the controls become more natural and the potential becomes clear - both your brain and your thumbs will be put to the test, but the insanity of it all makes sense.

Now, of course, the game's mechanical companion is explained in the fiction. Humanity is on the verge of total annihilation after being attacked by ethereal monsters for many years. These attackers have then been enslaved over a long period of time and a scientist comes up with a plan to catch one of these monsters and turn it against its kin. Maybe an astral necklace and a pocket-sized prison might help in this plan? Fire must fight fire, but who shall strike the match?

The player takes control of the silent half of the Howard Twins and is tasked with mastering and utilising the captured legion in the battle against the Chimerical hordes. However, it's a considerable task involving not only deadly battles against an extensive gallery of monsters but also numerous platforming sequences, some light detective work, and the problem-solving needed to get past a series of enigmatic puzzles. Thus, Astral Chain does not only task you with saving the world, it also offers a rather unusual mix of gameplay elements that place you somewhere between a police officer and a lion tamer.

The ability, or rather necessity, of managing two characters at the same time creates a unique challenge, but it certainly opens up many interesting variations in an otherwise relatively conventional theme. In combat situations, the legion does very well while on autopilot, but by controlling it manually you'll be able to pinpoint specific enemies, execute technical attacks, or position both characters in a way that makes a so-called 'astral chain' that wraps around careless enemies. The result is an inclusive player dynamic that's rarely emphasised.

Your monster can't die, but is gradually drained of energy and must therefore periodically return to your wrist prison to charge. There is a number of different situational attacks and reactions that'll potentially come from your monstrous companion whether it is active or not. A volatile blue shape helps to alert you of various opportune combination attacks, so precise and time-sensitive responses are also important.

There has never been any doubt regarding the developer's ability to build a robust combat system. The real surprise with Astral Chain is how much more the game has to offer. It certainly doesn't lack in terms of colourful, adrenaline-pumping battle sequences where beaten enemies explode into clouds of bloody neon, while djent-like metal music can be heard blasting in the background - but there are also plenty of moments, even entire sections, where Astral Chain plays out at a different, slower pace, with a greater focus on discovery, storytelling and problem-solving.

Mankind only grasps the loose concept of the threat and it's often a challenge to locate the monsters in the first place, so substantial portions of the game's fourteen to fifteen missions are spent interrogating witnesses, investigating clues and solving minor puzzles. The legion monsters play an important role in this as well. The sword deer, for example, can eavesdrop on suspicious characters, while the wolf can track scents and dig up hidden items. The in-game detective work often borders on the banal, but it's a good way to cleanse one's palette, which also helps maintain the player's grip on the red thread of the main narrative and its action.

PlatinumGames is perhaps best known for making hoarse, explosive art, but the crazy action is usually accompanied by a strong narrative. Astral Chain is no exception to this, on the contrary. Considerable effort has been put into creating a world that's both visually and thematically interesting to explore (at least to the extent that the game allows), with many optional missions and side activities that offer a modest contribution to the experience without ever getting in the way of the real focus.

It certainly doesn't hurt that the studio's sources of inspiration are of the finest sort. The influence of pop-culture heavyweights like Ghost in the Shell, Appleseed and Neon Genesis: Evangelion is hard to miss. This doesn't mean that the narrative in Astral Chain can actually compete with those mentioned, but the story is interesting, the inspiration well-chosen, and the ambition commendable - and the game is helped a lot by a rich gallery of charismatic characters.

Japanese melodrama requires just the right temperament, but our main annoyance with Astral Chain was that this wasn't emphasised enough. We miss the infantile quarrels and the anxious monologues. Unfortunately, the voiceless protagonist, whose relationship to their mission, their twin and, most importantly, their enslaved companion, seemed a bit underdeveloped. We would have preferred more edge. Not much more, but just a bit.

That was our main disappointment, but Astral Chain has a lot more to offer. PlatinumGames manages to unfold the game's unique premise in the best possible way, both mechanically and narratively. In addition to combat situations and detective work, Astral Chain also involves some puzzle-solving and platforming sections where you have to jump, run, push or hover through various areas with the help of your legion companions. You can even let a friend control the legion, in a fun but limited experience reminiscent of the Super Mario Odyssey cap feature.

And there's even more to it, with a good deal of minor side missions, upgrade modules that can affect your play style, variable attack combinations, five legion monsters with distinct characteristics and, by extension, three different difficulty levels and impressive replay value. There's a delicate line separating mechanical innovation and gimmicky game design as well.

Astral Chain is not a wild experiment like Star Fox Zero, it's not as introspective as Nier: Automata, and it's far from as extravagant as Bayonetta, but it has something else. We don't know if we could put Astral Chain on the top of the pedestal as Platinum's best game, but it's definitely a well-rounded, versatile experience with a strong mechanical identity - a careful cross-section of the developer's back catalogue pulled together with a unique and well-put-together premise, moments of pocket-philosophical ecstasy, and copious amounts of charm.

HQ
Gamereactor UK
+
Difficult but well-developed game premise, a fairly versatile gaming experience with a good combat system, fun detective work and riddle solving, nice voice acting
-
The narrative could have packed more of a punch, the first few hours are heavy with guides.
is our network score. What's yours? The network score is the average of every country's score

"The story is interesting, the inspiration well-chosen, and the ambition commendable - and the game is helped a lot by a rich gallery of charismatic characters."

Astral Chain is up on today's livestream

PlatinumGames has made a splash with this Switch release, and we're getting stuck in to try it out.

Don't expect Astral Chain to be released for PS4

Hideki Kamiya has said that he doesn't hate PS4, just that Nintendo is the publisher and investor in the game.

Wreckfest, Man of Medan, and Control all fell behind Platinum Games' Switch-exclusive action title this week.

We get to see a new area and fresh enemies, guided by director Takahisa Taura during Gamescom 2019.

Astral Chain is out on the Switch this August

Bayonetta 3 isn't the only Switch exclusive coming from the talented studio, and this seems to be the same kind of insane... in a good way.

Thank you for your time. We will take care of this matter as soon as posible
This games looks amazing. Nier: Automata is one of my favourite games of all time, not to mention that Ghost in the Shell and Appleseed are two of my all-time favourite feature-length animes.

I had no idea this game even existed though, it completely flew under my radar.

Thanks so much for bringing it to my attention. It's added to my 'to buy' list. 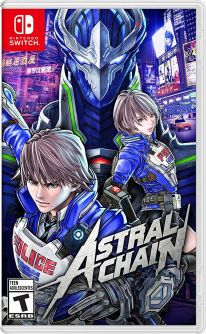