Simulating car physics is no easy thing. Despite this, there are plenty of developers including console-focused studios such as Polyphony Digital and Turn 10 that, over the years, have been skilled at simulating accelerating mass, inertia, momentum and how the suspension on a racing car behaves. However, very few developers have succeeded in creating realistic tyre physics.

Tyres are super difficult to simulate. Incredibly difficult, even. And even though all serious gaming studios work in pretty much the same way, the results are often wildly different. First, you need to collect great amounts of data from one of the world's leading tyre manufacturers, data originating from the racing world and that is also distributed to various racing teams to be analysed and thus help them set their cars up even more precisely in relation to what is happening on the track. Hot air expands, of course, takes up more space than cold, and this naturally affects the tyre tread and how they perform in general. Then we have the slip-angle; how much grip there is at a tyre's absolute limit and how to simulate this and send detailed feedback to the player on exactly where the tyre is in terms of slip. It's hard work.

Data analysis is not enough, however, and this is where the guesswork comes in, because it is as much about deciphering and reading real data as it is trying to guess at the various parameters that help create the feel of driving, and here comes the big difference between different racing simulators. For years, Slightly Mad Studios has been criticised for its tyre physics feeling as if they "float" on top of the tarmac rather than the tyre really grabbing the surface, while the Iracing team's super experienced veteran Dave Kaemmer has been severely criticised by the community for making that game's tyre model uncompromising. It is, as I said, a very hard nut to crack. Difficult, demanding analysis of tons of data mixed with delicate guesses in a world where the most committed players go nuts over the smallest things. However, when a tiny 18-dev strong Italian team called Kunos Simulazioni, with racing driver Marco Massarutt at the wheel, released Assetto Corsa a little over six years ago, it quickly became one of the sim racing genre's shining stars and a title that challenged the elite inside the genre from day one. Fast forward a few years and 13 months ago, Kunos released a follow-up, based solely on GT World Challenge racing.

Assetto Corsa Competizione is based on Unreal Engine 4, while Kunos' debut title was based on proprietary graphics technology that, according to the team, cost many millions of dollars to develop. Epic's well-used engine is not commonly used in this genre, which meant that Kunos, despite the finished rendering tools and systems for texturing and lighting, had to work on the physics and other vital elements simply to tweak the engine enough for it to be able to simulate today's GT3 cars and race them. Laser-scanned tracks, a fresh menu system, a new sound engine with newly recorded engine audio, and a new online setup were all added and, by the end, Assetto Corsa Competizione was a brilliant racing game. Or at least it's a brilliant racing game on the PC. The conversion work here has been done by British developer D3t Limited and it is here that the whole project looks to have come apart at the seams in a way that I have not seen for many years. Let me explain.

To be able to reliably simulate tyre behaviour and via what happens in the digital rubber send thousands of small messages to the steering wheel in the form of hyper-detailed force feedback, it requires a game of this type to roll at least 60 frames-per-second, I would say. As an absolute minimum. When playing Assetto Corsa Competizione on PC I have set the graphics so that I get about 80 steady frames per second and would like to say that it is my limit, for the game to feel as good as it possibly can. However, my HP Omen Obelisk is far more powerful than both a PS4 Pro and an Xbox One X, which Kunos and D3t tried to get around, but to decide to let a pure, dedicated racing simulator of this type run at 30 frames-per-second rather than sacrificing some visual fidelity is one of the most frustrating decisions that this genre has seen in years. It pains me to say, but at least in some cases, I would go as far as saying that this console version is borderline unplayable.

30 frames per second (in addition to the image itself stuttering and going as low as 20) means that as a driver I do not get enough feedback in the steering wheel and that means I lose the feeling for what my tyres are doing, how they behave, where the grip is, and where it isn't. I have experienced constant problems with how separated and distant I feel from what the tyres are doing in this version of the game, which in combination with a generous amount of lag between car behaviour and steering wheel, made me chronically annoyed during my time with Assetto Corsa Competizione on PS4. Even more so when you consider that the console version of the first Assetto Corsa was flawed in general but still ran nicely at 50-60 FPS, just like Gran Turismo Sport, Project CARS 2 and Dirt Rally 2.0 does on the same hardware.

On top of that, there is no way to alter the field of view in this console edition. I'm sitting too close to the steering wheel in my car and thus it feels a little lethargic. However, there are a lot of positive aspects here, things that make this whole ordeal even more saddening. The graphics themselves are nice; clean, tidy visuals with beautifully accurate, detailed laser-scanned tracks, fantastic car models and superb real-time shadows (no static shadow maps as in GT Sport). The presentation is good too, although the menu system still feels a bit too mouse-focused. Loading times are super short and the soundscape is the single best in the sim racing world today.

It's a shame, a real shame. The PC original is superb and extremely detailed with realistic car physics (far more realistic than Gran Turismo Sport and Forza Motorsport 7), but all that is ruined by the fact that the game runs at 20-30 FPS, which in turn creates lag and crashes the force feedback. This console version should have released later this year for PlayStation 5 and Xbox Series X instead, with a locked frame rate of at least 60 frames-per-second. 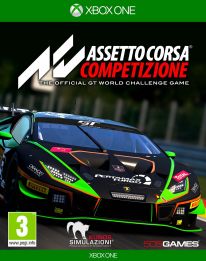