Tending your garden? Sending your kids off to university and turning their bedroom back into your study? Trying to hold onto a comfortable job while looking forward to retiring (hopefully) comfortably within the next ten years?

Whatever you envision, it's doubtful your planned activities would include scaling up the sides of massive buildings, parkouring across city rooftops and fighting off multiple attackers carry pikes, swords and other massive edged weapons.

But such was the lot history had in store for one Ezio Auditore da Firenze, if Assassin's Creed: Revelations is anything to go by. When we get our first look at the long-suffering protagonist of Ubisoft's latest adventure in Renaissance Europe, it's something of a shock.

Gone is the dapper Lothario introduced to us in Assassin's Creed II. At 52, Ezio looks haggard; his face is creased with age and marked with scars, his voice is now a sombre growl and the look in his eyes speaks of bitter experience and bloodshed. This is a man who has led a hard life, and as we join him entering the port of Constantinople on the deck of a ship, it seems his trials are not yet over.

The first few moments of our hands-on time with Revelations introduces us to the thriving metropolis at the heart of the Turkish Ottoman Empire. At street level it's a hive of activity; shopkeepers yell to attract customers to their wares, armed guards prowl the sun-bleached streets and collections of thugs and Romany women frequent doorways - and both are for hire. Once we head up to the rooftops we see an expanse of tiled surfaces, spires and domes stretch away to the horizon.

We're told by the first two NPCs Ezio encounters that, in spite of its sunny veneer, Constantinople is a city in turmoil. The news about town is that the Sultan is sick and his death may trigger a battle for the throne between his many sons; "when the Sultan coughs, his sons all reach for their swords," is how one character puts it. Furthermore, a vicious turf war is being fought on the streets between the Ottomans and the Byzantines, with the Assassin's Guild caught in the middle. Both of the former frequently raid the Brotherhood's many headquarters throughout the city, driving them out and hanging their colours up as a direct insult to their conquered foes.

This news is parcelled off to Ezio in two encounters. On the deck of the ship he meets an enigmatic young nobleman, who is clearly educated and philosophical about the problems his land faces. Once he lands in Constantinople, Ezio meets Yusuf Tazim, a likable if slightly cocky member of the local Assassin's Guild. The youth and exuberance of both - and the way in which Yusuf constantly refers to Ezio as ‘mentor' - once again drives home how long in the tooth the Italian has become.

However, Ezio's age doesn't preclude him from adding a couple of new skills and weapons to his already impressive collection. The first handy new item Ezio is given (by Yusuf, as it happens) is a hookblade, which slides into the slot on his wrist next to his retractable blades. With this, Ezio can extend his reach between buildings, meaning he can now jump over greater divides, and it allows him to grapple onto higher ledges, so the time he takes to scale up the sides of buildings is now greatly reduced. The hookblade can also be used as a weapon in combat, to either to lethally rip open an opponent's throat, or non-lethally, to allow Ezio to flip over their back and leave them sprawling on the cobbles.

Best of all, the hookblade is a handy mode of transport; Constantinople's rooftops are covered with a series of zip lines, and by launching into the air and deploying his hookblade, Ezio can slide across great distances quickly. He can also launch himself off the zipline and onto any enemies in his vicinity and execute an aerial assassination.

Aside from his new found climbing and fighting abilities, Ezio is now able to command troops in a mini tower-defence game the developers have added to he proceedings. As was mentioned, Ottoman and Byzantine forces will sometimes attack Assassin strongholds, and when this happens, players can send Ezio to direct the HQ's defence.

Players take up a position over a stretch of street leading to the Assassin's den, and then need fight off the increasingly deadly waves of enemies. To that end they need to position units along the rooftops overlooking the street and place blockades at intervals to slow down the attackers. Units start off as crossbow-wielding marksman, but they can be upgraded to carry muskets. Players can also upgrade barricades making them harder to break down.

Blockades and units are both purchased using morale, which is earned by the number of Assassin leaders the player employs, and also the number of enemy kills they rack up. Players can also spend morale points to deploy ranged canon bombardments - which comes in handy in the mini-game's final wave, when the attackers show up with a massive battering ram.

As in Assassin's Creed: Brotherhood, Ezio is able to deploy assassin allies as a distance attack and can also send them out on missions around the game's virtual world map, to earn experience. However, in Revelations, assassins can now be assigned to dens, once they've earned enough XP to reach level 10. When this happens, the game opens a two-part mission that, once completed, earns the assassin the title of Master Assassin. Dens that have Master Assassins assigned to them are impervious to attack from either the Ottoman or Byzantine factions, so it's worth making sure Ezio's students are levelled up as quickly as possible.

Besides defending dens, and retaking captured assassin strongholds - which plays out in a similar way to the Borgia tower side-missions in Brotherhood - Ezio's main objective in Constantinople is to hunt down keys which will allow him to access the memories of Altair, the protagonist of the original game. During flashback missions in which the player takes control of Altair, it's revealed that the assassin came across a weapon powerful enough to end the war between the Templar and Assassin factions. Ezio now needs to track down that weapon and in the hands-on time we had with the game his adventures saw him tracking a shipment of arms through the city streets, retaking territory for his guild, and even prancing around at a party in the palace disguised as a lute player.

Without giving too much of the story away Revelations feels like a fitting final chapter for the character of Ezio Auditore da Firenze. He may boast some new abilities and new weapons, but really it's his adventure that is the driving force behind Revelations, as it was in Brotherhood and Assassin's Creed II. Ezio may be 52, but he's still one of the strongest characters in the medium in recent memory. If Revelations lives up to the promise it displayed during our hands-on time, it will more than do justice to his memory.

REVIEW. Written by Nikolaj Kürstein Jepsen | GR Denmark on the 14th of November 2011 at 17

"As the title implies we're due some answers and that's what we're getting in Assassin's Creed: Revelations."

Travel the Mediterranean with Ezio.

GRTV: Take a tour of Massive

One of the Assassin's Creed devs. 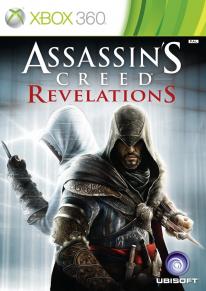