There are two likely reasons why the once PS Vita exclusive Assassin's Creed III: Liberation is making its way over to PC, PS3 and Xbox 360 as a digital download. With Vita sales modest Ubisoft wanted more Assassin's Creed fans to enjoy this side story starring the lovely Avéline, and they also likely wanted to earn back some of the investment lost as the sales of the Vita game likely didn't meet expectations.

In the fall of 2012 Assassin's Creed III: Liberation was met with largely positive reviews, especially when compared to the other big name release Call of Duty: Black Ops Declassified on the system at the time. It's an abbreviated chapter of the Assassin's Creed saga that plays out in the second half of the 18th century in New Orleans and a couple of locations around the Gulf of Mexico. There is no great big open world to explore and the side attractions are far fewer than in your standard Assassin's Creed release.

So 15 months later the same game comes to consoles and PC and with the excellent Assassin's Creed IV: Black Flag fresh in mind we cannot help but feel underwhelmed. It feels abbreviated and not like a full offering of Assassin's Creed even if most of the components are there in some form. Compared to other digital releases it's not terribly short, it's just that a lot of mechanics (such as the little trading game) simply make little sense in a game that doesn't feature much open world gameplay. Where we spent a lot of time in Black Flag on Kenway's Fleet to earn money, the incentive just isn't there to invest time in it in Liberation HD.

Many things betray Liberation's roots as a portable game. The short sequences and abbreviated memories leave us unsatisfied on the big screen while they made perfect sense on a portable device. The graphics and textures betray the smaller original resolution and there are technical glitches you perhaps wouldn't notice as much on the smaller screens (some characters clearly float several inches above the ground). At times the design and visuals impress, but more often the game feels uninspired as far as buildings and environments go. It's a mixed bag in other words.

What the Assassin's Creed games often do well is how they chain together a series of events in a questline or sequence. It starts with a tip, then you have to stalk someone, eavesdrop on a conversation, perhaps kill and steal an item and then escape the situation. These sequences are much shorter in Assassin's Creed. When you stalk someone it's often just for a few blocks and then a cutscene interrupts. You seldom have to escape any real distance if at all after an assassination. It feels more like a traditional action-adventure game than a full-on Assassin's Creed.

There are positives however, Aveline being the first female lead in the series is certainly one of them. The story, while it follows a familiar soap opera-esque plot, is also decent if not overly memorable. The idea of using three different personas is nice, even if it is a little underused. The whip is an interesting and thematically appropriate weapon.

For a game that was released 15 months ago Assassin's Creed: Liberation HD sure features a lot of glitches and imperfections. It's not just the missions and overall length and scope of the game that feel abbreviated, but the animations also feel a bit off. That is fine as long as it doesn't hurt gameplay, but in certain cases it does as you can get caught slidding down slopes in a way that is uncharacteristic for the series. Once we had to wait for a timer to run out and our subsequent death in order to retry a particular section and another time we got stuck between a stretched rope and Chichen Itza in the sliding animation, unable to jump.

We didn't expect Ubisoft Sofia to completely renovate and remake this game for its big screen release and some of the flaws were expected, but it's still hard to see anyone but the hardcore Assassin's Creed fans finding this interesting, and to be honest it's light on the overall franchise lore as well. This is one Assassin's Creed you can skip as Ubisoft continues to up the number of releases in the franchise. It feels rather ironic that the game is called Liberation, when freedom is the aspect that I miss the most when compared to other Assassin's Creed titles.

Advertisements
Gamereactor UK
+
It's offers most of the aspects you expect in an Assassin's Creed, Aveline - female assassin extraordinaire, Personas add variation to the gameplay, Lots of French accents.
-
Underwhelming, Glitchy and uneven graphics, Feels very abbreviated.
is our network score. What's yours? The network score is the average of every country's score

some of the flaws were expected, but it's still hard to see anyone but the hardcore Assassin's Creed fans finding this interesting."

Associate producer: "We started work on Liberation HD right after we finished the Vita version".

ARTICLE. Written by Gillen McAllister, Arttu Rajala and Martin Eiser on the 20th of September 2013 at 12

Ubisoft's annual digital-focused event completed its global tour last week; we report back from the European leg with impressions of what was on show. 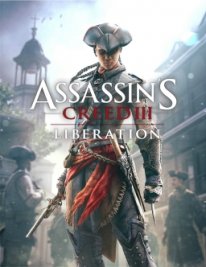