The Army of Two franchise found itself in a bit of a pickle after the most recent game Army of Two: The 40th Day (released in January 2010 - with metacritic scores of 73 and 74 (360/PS3). After the relatively good reception of the first game it seemed the series had lost steam, and players just didn't seem interested in Salem and Rios and their Shanghai shenanigans. The games had a fairly casual feel to them, the private military angle, the masks, the arcade style gameplay and the somewhat gimmicky co-op moves.

A lot has happened since. EA Montreal was brought into the Visceral Games family of studios, the main characters Salem and Rios were replaced, a new engine was introduced (Frostbite 2), and the co-op moves that was something of the signature feature in the first two games have been removed for the most part.

It's a brand new dawn for Army of Two, but one that comes with a major identity crisis. What is Army of Two at its core and why should we care about it come March 2013, with the likes of Bioshock Infinite, Crysis 3, Gears of War: Judgment, Aliens: Colonial Marines, and Metro: Last Light, releasing around the same time? If we are to believe the developer, the main thing here is that they want to create a fun, accessible, pick up and play co-operative popcorn and beer experience. As in a game you want to play for half an hour with a buddy, a couple of beers and some popcorn. It's not the most ambitious pitch I've heard, but at least it sounds honest. Army of Two: The Devil's Cartel isn't a game that wants to reinvent gaming as we know or send us on the path of enlightenment. It just wants to be fun.

After sitting down with a ten minute demo of the game I can see how they're trying to go about achieving that, but I can't say I had much fun. Instead of the many context sensitives co-op moves Salem and Rios had at their disposal, we're now treated to what can be described as a frantic cover based third person shooter where team play will help tally up points to unlock "overkill mode", where players are unvulnerable, do more damage and have infinite ammo for a few seconds. I quickly move from cover to cover with the tap of a button, it made for some ill advised cover changes early on, it's fluent and downplays the tactical side of using cover. Enemies make use of cover as well, even if they seemed oblivious to the effects that gunfire has on the destructible cover.

The Expendables is a film that springs to mind when being confronted with Army of Two: The Devil's Cartel and it's one the developers reference frequently. And it's fitting in a couple of ways. First of all, it's a film that asks of its audience to flip off their brains and just enjoy the ride, much like The Devil's Cartel, but it's also a film that harkens to the action movies of the 90's and in a way The Devil's Cartel harkens to old school arcade fundamentals. But they're also trying to achieve the same kind of over-the-top moments that will make you laugh out loud, much like The Expandables and its sequel does. One area where you can't compare the two, however, is characters, and if anything the two new protagonists have been toned down compared to the somewhat obnoxious Salem and Rios.

Some of the elements of the previous games are still there in the background. There is "aggro" in play, even if it's more in the background. It allows your partner to flank and score kills from behind that in turn score more points in terms of the "overkill" counter, and some of the co-op moves like "step up" will be there as simple one press context sensitive button presses.

Other than the Army of Two: The Devil's Cartel plays just like your average Gears of War clone. Enemy are durable and so are you, and as long as you stick to cover for the most part you're fine.

The thing that really prevented me from enjoying Army of Two: The Devil's Cartel at this stage, however, was the state of the code. It's seldom that games journalists are allowed to play a demo that shows off numerous bugs and glitches in just a few minutes of playing it. It's not that these issues (getting stuck on a piece of cover for instance) cannot be solved, it's the questions it raises about the state of the rest of the game if this is the part of the game you feel comfortable showing off. It makes me worried with just five months until release - realistically four months until submission. The game benefits from using the Frostbite 2 Engine, that allows for some pretty sweet destruction, but as far as Frostbite 2 games go, this is a bit underwhelming in terms of visuals. The South American theme, offers some nice scenarios, but it also feels a bit tired - and hopefully there's more this game than dusty backyards and bodegas.

This brief hands-on experience with Army of Two: The Devil's Cartel left me feeling indifferent. There was really nothing much to grab my attention and catch my interest. Sure, co-operative action is always fun, and the insanity of the "overkill" could provide us with some laughs, but ultimately it comes across as a bit bland and lacking in terms of identity.

"There is not a shred of an original idea or concept anywhere to be found. No vision, no attempt to be anything but forgettable."

Sample The Devil's Cartel ahead of launch.

We learn more about the adventures of Alpha and Bravo in this interview with Visceral Games.

First impressions aren't always correct as we try a bit more of The Devil's Cartel.

The Devil's Cartel at Gamex.

Interview on next Army of Two. 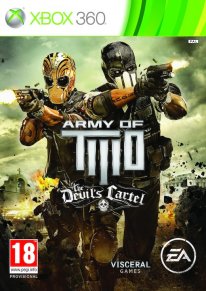