In around a month, Lince Works will launch its latest title, Aragami 2. Set to be a direct sequel to the 2016 original, this game expands on what was delivered and bolsters it with better visuals and more combat options, all over a full singleplayer or multiplayer campaign. Ahead of launch, I've been able to get hands-on with Aragami 2, to play the first 12 missions of the storyline, and to see how this series has evolved over the five years since the first entry was released.

Taking place 100 years after the events of Aragami, this sequel sees our mysterious master of stealth navigating a world where rival clans and factions are competing to gain power over one another. So, despite being a direct sequel, there is enough of a gap between this game and the first that you can quite easily dive right in without experiencing the original.

The storyline for Aragami 2 sees the masked assassin join a clan of beings who have been tainted by a supernatural affliction that corrodes the body and mind. It's within this community that the usually ostracised ninja finds a home, and begins using its skillset to carry out assignments to ensure the survival and protection of this village from the hostile outside world.

That's basically the rundown of what Aragami 2 asks you to do. You'll be sent to a location to complete a set of objectives, to earn rewards and advance the storyline. These can be anything from tagging some supplies, eliminating targets, or rescuing kidnapped village members, but it's not the objective that makes Aragami 2 interesting: it's the options it provides you to be able to accomplish the feat.

Each location you're sent to is a miniature sandbox, packed with buildings, interactables, enemies, and even lootable objects. You can accept an assignment, head to a location and complete the goals in three minutes, if you're fast, or alternatively, you can take your time, assess the environment, plan your attack, and execute it precisely. That's what makes this game so fun. The core goal is always very simple and obvious, but it's down to you to complete it, and in pretty much whichever way you please.

Whether you prefer the stealthy approach, remaining in the shadows and only striking when necessary; or a more aggressive method, using your combat skills and abilities to slice and dice through enemies, Aragami 2 really does allow you to play as you see fit - although running in head first into a horde of enemies will usually result in a pretty swift death. This works because the game uses the systems in place from the original and expands on it, giving you even more freedom and options in its sandbox in terms of movement and stealth mechanics.

I will say that the many options you are given, and the usually quite fast-paced nature of the game can be a little tricky to master on mouse and keyboard, and that the movement features a rather savage stamina system that can often be the result of being discovered, or even dying. In this regard, Aragami 2 doesn't slack on its challenge.

But, if you can master the controls, and overcome (or more accurately accept) the stamina limitations, you can have a lot of fun with the abilities (most of which allow you to manipulate objects in the environment and take down enemies in an even more creative manner), and the sandbox.

The actual combat itself is also nothing to sneer at. It's tough and is heavily reliant on timing, but it's also very rewarding. You can slash, block, and parry, and once again, the entire system revolves around stamina, and managing yours better than the enemy's. With the core design of Aragami 2 in mind, you won't want to be in many sword fights, as it is, in effect, a last resort. Yet, it's still a feature that I found myself using frequently, often by choice.

The combat and movement is bolstered by acquiring new abilities, earnt by spending points gained from levelling up with experience. XP is rewarded for completing missions and so is gold, the latter being used to buy consumables or even new cosmetics for your ninja. The ability points will be spent in a tree of upgrades that make you a more competent assassin, and can unlock moves such as being able to simply whistle to attract enemies, or rather create a decoy of yourself to distract them.

Admittedly, as I played more, I found that the core mechanics of movement, killing, and stealth served more than well enough to allow me to complete my goals, and the other unlockable abilities fell to the wayside a little bit.

Since the time difference between Aragami 2 and the original is around five years, as you might have expected, the game has received quite significant visual upgrades. The most noticeable is the main character, who no longer looks like a shade with a red cloak. The assassin is now a character with depth that looks like it belongs in the world, and this extends to the movement animations, which are far more fluid and refined than that of the first game - as you would have hoped.

So in general, what can we expect from Aragami 2? This game is shaping up to be a more refined instalment into the series. There are more options as to how you explore and abuse the miniature sandbox levels, and the fluidity of the game is significantly improved. Granted, there are few areas that still caused me some trouble, be it the stamina system, the controls being a little tricky, or even a few bugs here and there (with this being a preview build, these should be hammered out ahead of launch), but with plenty of content, and multiplayer support, these feel like minor issues in an otherwise engaging experience.

We're embracing the shadows in Aragami 2 on today's GR Live

The ninja stealth sequel is been fully completed. 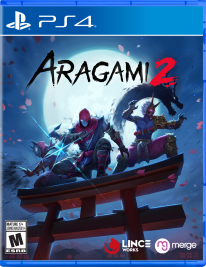