Attack on Titan is currently one of the most popular manga and anime properties worldwide. A.O.T: Wings of Freedom, developed by Omega Force and released in 2016 on PS4, PS Vita, PS3, Xbox One and PC was also a big success.

It's sequel, A.O.T. 2 (European title, it's Attack on Titan 2 elsewhere) seems to be the continuation of hack and slash heavy action from the first game. If the anime is considered one of the most beautiful ever made, it seems that the next game will follow in its footsteps. Indeed, at its launch planned in a few weeks, the owners of PS4 Pro and Xbox One X will enjoy the game in 4K resolution and with improved framerate.

"PS4 Pro and Xbox One X have a higher, steadier, frame rate than the base steady 30fps. The PS4 Pro is 4K and 1080p, while the Xbox One X are according to the hardware specifications", said Hisashi Koinuma, Koei-Tecmo's director in charge of the project to Gaming Bolt.

For those who own the basic versions of PlayStation 4 and Xbox One, rest assured, they will still turn respectively at 30fps and 1080p, and 30fps and 900p. The game will be available on PlayStation 4, Xbox One, Nintendo Switch, PS Vita, and PC. The game is scheduled for release on March 20th. 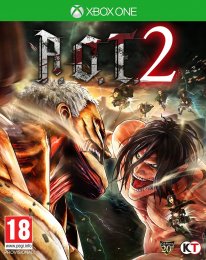