It is fascinating to witness how the cultural differences between Japanese and Western developers manifest themselves in different genres. While Western RPG's aim to give you freedom, through customization or exploration, Japanese developers have focused more on telling a linear story, much like you would read a story in a book.

This is something that also rings true with adventure games. Where adventure games developed over here often gives you big worlds to explore, problems to solve and a lot of moving back and forth, a Japanese adventure more or less takes you by the hand and gives you a book of tasks that you need to complete before you proceed.

That takes us to Another Code R where we follow Ashley, a 16-year old girl who lost her mother 13 years ago. In Another Code on Nintendo DS we followed Ashley as a 14-year old, as she solved the murder of her mother with her father. Since then Ashley has grown up to be a more complex personality, a teenager with a distanced relationship to her workaholic father. Her father sends her an invitation to visit a natural reserve and Ashley accepts in the hopes of bettering their relationship. However, as Ashley arrives it becomes clear she has been there before and memories of her dead mother appears along with a new mystery for her to solve.

On the back of the box it says: "Read & Solve like a Mystery Novel" and "Basic reading ability is needed to fully enjoy this game" (if you can read this review I think you are fine). But it should be noted that a lot of reading is involved. A lot. Too much for some, and the information is repeated over and over.

After an uphill struggle the first few hours the story and the characters grab a hold of me. Ashley is a well designed main character, a tormented teenager, who despite some emo tendencies strikes me as both likeable and admirable. Her growing friendship with Matthew, a boy three years her junior, is one a gladly follow, while other characters in the game are less dynamic.

As you may have concluded the game is mostly made up of seemingly never ending dialogue. When you're not talking you are exploring, moving right and left passed three dimensional backdrops along a road, which gives it a theatrical feel. The visuals are beautiful, without being technically advanced, and complement the game very well. The music isn't as striking, but some of the simple themes stuck.

When you are exploring buildings and other locations of special interest you can point and click on objects to get more information, or pick them up and interact with them as you would expect in a traditional adventure game. The game is filled with details and sometimes it feels like a bit of a chore to arrive at a new location and be forced to examine all the objects. Especially as most of the will be described with words such as "There is a yellow piece of cloth on the table" or "This is picture one out of three on the wall". You seldom know what and where to look, so you end up systematically going over all the objects in a room to find whatever it is that I'm supposed to find.

It is also frustrating that you can't pocket important items regardless of whether you have arrived at the problem they are need for or not. Some times I have searched a location fully, just to arrive at a problem later than requires a certain object that I was unable to pick up earlier and I'm forced to backtrack.

I mentioned earlier that Another Code R holds you by the hand, and I will explain just how this works. If there is a clue or an item in a room that you need, you won't be allowed to leave said room until you've gotten it. It's a nice feeling to be certain of not having missed anything essential when you leave, but at the same time I feel a bit locked down and it takes away some of the tension. In my opinion the weakest element of the game.

It is entirely true that this game is all about reading and solving a mystery novel. Another Code R is a charming, but passive experience with a gradually more and more exciting story. Perfect for lazy summer nights, when you feel like a nice and relaxing time on the couch.

Gamereactor UK
+
Charming graphics, story that grows on you.
-
The dialogue is repetitive and explains too much, very linear.
is our network score. What's yours? The network score is the average of every country's score

Ashley has another mystery to solve. This time on the Nintendo Wii 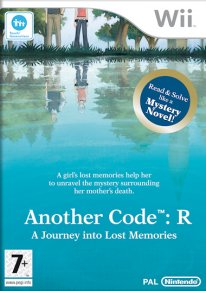 Professor Layton and the Curious Village