When we saw Animal Crossing: Happy Home Designer for the first time, it looked like a minor title to us. A quick side project next to the main series, to exploit its charming characters and test the waters with their new Amiibo cards. However, after playing the first few hours (without losing sight of its success in Japan), we have to acknowledge that we were quite wrong. Not only is this new release really meaty, but it can also be seen as, at last, an evolution of the worn-out original formula.

To make it easier for those who know nothing about the game, let's make clear the main differences between Happy Home Designer and a traditional Animal Crossing game.

There's no town. You're not a new neighbour (in fact, you don't even have a house, despite being a home designer!). Having said that, you don't have to earn a living either. You don't have to save money in order to keep improving your home or your collection of items. The aim here isn't to evolve your estate and add new possessions, and thus you can also avoid the hassle of having to go beg Tom Nook, bartering with neighbours, or having to look for a job.

Indeed, you have a job from the start in Happy Home Designer; you don't even have to think about your bills, because there are none. You've been hired as a... uhm, happy interior designer (and you'll do some outdoor designs too) whose task is meeting the needs of the town through new (and very cute) infrastructures, houses for the town's residents, and public service buildings. In the game, each 'mission' is called a public works project.

Then, if you don't have to find the house of your dreams or a collection of objects to be the envy of the whole town and the other players, where's the hook? Why would we keep playing Happy Home Designer?

It's down to possibilities and curiosity. Obtaining power in urban and real estate shares. Showing your talent and, perhaps, causing emotions among the other animals. At first, you start creating a few simple interior designs based on a limited range of items, so the main hook is to unlock more themes and items. The house that Lottie needs is the tutorial, but after that you do a black and white design for another neighbour, a student apartment, a rustic wooden home, a wintery house...

The fact that it's not your own home with differently themed rooms, but a customer request, might allow more freedom and expression when designing, because different tastes are given to you with each request. It's a alternative way of being creative with the elements of Animal Crossing.

When it seemed that we were going to get bored after making three houses for our neighbours, the game started opening up and showing us new possibilities. You can follow 'online courses' (you can only take one a day, they are paid with game coins) that unlock new collections of decorative items, and so does every dedicated public works project.

In the former case, we're talking about sets such as paintings, insects, lamps, fossils, sounds, gyroids... As for public works projects, you'll work on schools, shops, hospitals, cafes... In turn, after a while, your creations can also be modified and expanded.

Since this game focusses on designing, and not in the many other activities found elsewhere in the series, the menus and tools for creating and editing have also been changed. Now there's a really welcome tactile schematic editor, which is very useful to move, copy, rotate and so on from an overhead perspective. In addition, after learning a couple of courses, you will be able to place a free camera to take more creative photos or even edit specific items with colours of your liking.

For better or for worse, it's the traditional aspect that's most affected by this new take. The characters that fans love so much are there, under the spotlight, but they lose a lot of their personality with the disappearance of social relationships. The dialogue, which used to be so elaborate and funny, is now reduced to brief exchanges before and after the requests, or the eventual visit to houses and buildings that you've already created, and therefore it doesn't give off the same feeling of friendship because you don't share any experiences together; it's just a cordial professional relationship.

Even so, the game is still about meeting the needs of these animals, and when you deliver what they requested, they express their satisfaction with an emotion (hence the title). At the same time, the game also launches a tour of your new work with some characters inside, and you can take pictures of it from different angles.

And there's also the same characters, operating the same businesses. Tom Nook is now your boss, his secretary is the new otter Lottie, Isabelle is still in the town hall (and she sets your project's requirements), her brother Digby helps you with modifications, Lyle is in charge of the new Amiibo feature... We don't think you're going to lose familiarity or connection with the characters, it's just that the bond will be colder.

Regarding the Amiibo cards, we haven't tested the game with them yet. They are used to add (invite) new neighbours, with their corresponding houses (which means more to design and new furniture too). Lyle and his phone will be your connection with the real, physical world. Nintendo will launch more than 400 cards, so we're looking forward to see in which way and how much each of them will improve the experience.

Similarly, between now and launch we'd also like to see how much the game can be stretched from where it is. As of now, the rate of content is good and it holds your interest fairly well. The save system is a bit heavy (especially with modifications) and it seems that online courses end too soon, but these are two temporary flaws and all things considered, we're hooked on home design.

Animal Crossing: Happy Home Designer will launch on October 2nd, exclusively for Nintendo 3DS. We hope to offer our review a bit earlier than that.

REVIEW. Written by Fabrizia Malgieri on the 26th of September 2015 at 14

"This new spin-off didn't immerse us as much as we would've liked, although there are a few fun features in there that will offer some amusement."

PREVIEW. Written by David Caballero on the 1st of September 2015 at 16

There's no time for strolls or chatter in the busy life of a home designer, it's all work. 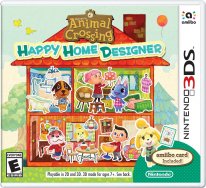