All Walls Must Fall takes place in a world where the Cold War never ended. 150 years on, time manipulation technology has been developed and the world is at breaking point, so both sides have sent agents back in time to find the person behind an order that will commence a rogue nuclear strike and effectively end the world as we know it. Gameplay is isometric and tactical, where all the action happens to the beat of music.

After just five days, All Walls Must Fall has raised over €15,000 on Kickstarter. German independent studio inbetweengames are the guys behind the upcoming tech-noir tactics game, and Jan David Hassel, one of the designers, had this to say on smashing their target: "We are ecstatic to reach our initial funding goal for All Walls Must Fall, in the first five days and would like to thank every backer that has belief in our vision, so we can turn this into a reality. We are excited about pushing our vision for All Walls Must Fall further, with the announcement of two stretch goals of Vandalism! And Act 2: West Berlin."

Vandalism! will be unlocked at €20,000, and consists of an extended cover system, more destructible objects, the ability to knock down walls with a cybernetic fist, and a pulsating Acid Techno track from Jukio Kallio, the guy behind the music in Nuclear Throne. Act 2: West Berlin will be unlocked at €75,000 and doubles the length of the campaign, introduces a new character, and more.

You can find out more, including the full trailer here. Does this sound like it's bringing something new? 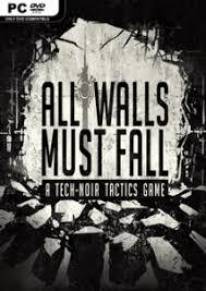