Unfortunately, we're still not in a situation where we can expect all multiformat multiplayer games to have crossplay support, even though it is vastly superior for the users in many ways. Even though it is getting more and more common, there are still upcoming titles that does not have this.

Now it turns out that Aliens: Fireteam Elite is one of them. This co-op shooter only has crossplay within the same console family, which means PlayStation 4 and 5 can play, the Xbox players can have their fun and PC players will have to settle with other PC-players. There aren't even any plans to add this feature at this point.

Bummer, but let's hope the developers will reconsider further down the line.

UK Charts: Aliens: Fireteam Elite has gunned its way to the top

Marvel's Avengers has also sneaked its way back into the top 10.

Join us for two hours of the Cold Iron Studios developed action title.

Release is only a couple of weeks away.

Aliens: Fireteam Elite has no crossplay

It only exists between console families.

Yes, Cold Iron Studios has decided to add another word to the title. 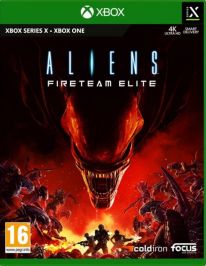