It's our second encounter with Creative Assembly's survival horror, and once more our shirt is soaked through with sweat by demo's end. It's yet another stressful session as we try and complete objectives aboard a space station while avoiding the attentions of a murderous xenomorph.

At an hour in length, the new slice of gameplay is double what we were teased with previously, and there's a multitude of new elements to contend with, the developer actively addressing issues we raised after the first demo gave us an impressive, but seemingly limited gameplay slice. we wondered how the team could sustain interest across the full game with just those particular beats of You Vs. Alien. In response, we get today's build: the lens has been widened, and more figures and new threats join us in our deep space adventure.

We're still on the space station, still playing Ellen Ripley's daughter, Amanda. A demo-specific intro detailing the creature we'll face reels out, instructions for survival intoned over grainy, VHS-quality footage with only glimpses of the Alien seen throughout. The rules, as before, are simple: you can't kill it. It'll find you through sight, sound. You have to hide, to keep eyes peeled to your motion tracker to track its movements. Running means excessive noise, and doing so when it's anywhere close to you equals death. The intro emphasises the horrific end that'll greet you if you cross paths. Even going in knowing what to expect, we feel our heart rate increase. Heaven knows how first-timers at E3 reacted.

This time round we're entering a hospital wing, and we're not alone - beyond the near-silent killer scurrying in the vents above us and occasionally zig-zagging across our motion tracker that is. Amidst the corpses, rifling through a supplies closet, are other humans. Looters, scavengers. Far from friendly. Society has seemingly decayed quite rapidly in the light of whatever event has occurred prior to this demo slice, and its everyone for themselves.

We pace forward slowly to weigh their intentions towards us. We don't have long until we get our answer: they pull a gun. They don't even finish their warning before they start firing. We turn, run as fast as we can. It's telling how conditioned we are to survival already that we're less fearful of taking a bullet than the noise of gunfire, and the attention it'll bring. As we dash round a corner and immediately duck behind a gurney, we hear shout turn to scream, scrabbling noises intermixing with wet sounds. When we peer back round, we find only a destroyed body and pools of blood. A blip on our motion tracker moves away from the nearby air duct and into the bowls of the space station.

The second time this happens, we see the kill, and feel only slightly bad that we initiated it. As with the Alien, looters are randomly generated around the station, making every play through different, giving you different puzzles to overcome. An intersection previously empty is blocked by a looter group second time, and who whip out guns and warnings if we come closer. We take a moment to tinker with the crafting system, eluded to in our first hands-on and unlocked now. Items picked up around the station can be built into Molotov cocktails, sonic emitters. You'll soon favour them over a revolver or flare; the former kicks like a mule and feels like a safety blanket, the latter casts an unsettling red glow on everything, and you may as be waving a canapé at your hunter.

Most equipment are crafted from the same stock of supplies, so you have to decide what works best for you. we go for the sonic emitter, a device that'll pulse a high-pitched noise and works as an attractor to the Alien. We toss ours into the middle of the group and start backing up into the room we've come out of. Then a few things happen at once.

Unbeknownst to us, a fourth looter has crept up behind us from the other side of the room, and starts shooting. Again, we instinctively duck down behind the nearest bed in beside us, out of view of both looter, and more importantly, the intersection entrance. In a few short panicked breaths, we hear sickening sounds from the other side of the wall, and our shooter suddenly screams as we spot a huge, overhanging tail slowly sweep into the room. The looter shoots, and in the blinking of an eye - cheetah speed - the Alien shoots past, into the room and through the shooter. The speed is terrifying.

Yet it mightn't be the worst thing on the station. In one area we encounter a synthetic, a robotic humanoid that once it spots us, pursues us at walking pace, softly intoning how it's going to kill us. We're locked in the room with it until we can hack a computer terminal. It's here that we have our first flash of frustration with the game. It may be just the controller we were using, but switching to a run through a stick click doesn't feel as smooth and at times we're not even sure we've initiated it - as building up enough space between you is imperative to giving you time to computer hack, we feel a stab of annoyance when, third time trying to run round the room, we're grabbed again and beaten to death. While we use up all our cocktails and bullets to slow the thing, it's only post-game we're told by the developer there were EMP grenades stashed around the room. Something we couldn't spot because the room was so dark, and useful items only easily spotted when right up close. Hopefully we either get used to the telltale signs of their existence come the full game, or their outline is emphasised more for easier finding.

It's a shame to have such a niggle, but it doesn't diminish our expectation. This is a game we want to know more about, yet retain some essence of mystery when we sit down and play the whole thing in October. 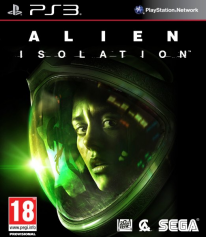