Remedy's Alan Wake is back. Stuck in a time loop trying to make his way out of the darkness and defeat his evil doppelganger Mr. Scratch. The writer is still looking for missing manuscript pages, trying to make sense out of a twisted version of reality.

You can choose to look at Alan Wake's American Nightmare in one of two ways (or both if you want to). Either it's a short sequel that doesn't do much to innovative the concept of the predecessor, and delivers much of the same experience. Or it's one of the first high-end digital-only releases that, were it not for its length and limited amount of geometry, could be mistaken for a full-on triple-A retail release.

Personally, I land somewhere in-between as I found the combat in the original game somewhat repetitive, and not a great deal of fun as far as those mechanics went. I played the original mostly for the story, but grew weary of it and stopped playing it as something else arrived that caught my attention. Meant to go back to it, but I never did.

The combat in American Nightmare is better for two reasons - there is more variation, and the maps are designed in a way so that you can retreat and regroup, and they're less linear than in the first game. What it still does well is that it keeps you guessing, nervous that a Taken may pop up behind you at any moment.

There are quite a lot of different Taken in American Nightmare: splitters, bird men (Taken that can take the form of a flock of birds), giants, grenadiers, hook men, firefighters, just to name a few. This variation helps as the main mechanic of shining your flashlight to weaken and shooting a Taken to kill them off is somewhat tedious.

It's easy to mistake American Nightmare for a retail title as far as the visuals go. It looks pretty much like Alan Wake, even if some of the in-engine cutscenes look a bit stiff. Where this game truly shines, however, is in the storytelling and the layers that Remedy use to build atmosphere and tension.

The aforementioned pages are one piece of the puzzle, your encounters with the unfortunate women who are stuck in the time loop with you another, then there are the creepy (yet brilliant) live action clips with Mr. Scratch as he tortures people, gives us his insights on various weapons, and explains to Alan what he wants to do with his wife.

Add to this the narrator and the framework of Night Springs, a TV series Alan worked on years ago and everything adds up to an interesting whole, and as our protagonist Alan Wake feels more up to taking on the darkness this time (he is as the narrator dubs him "The Champion of Light") it adds up to create a great story you cannot help but want to finish.

Everything isn't perfect, and I feel as though some of the character development as far as the women Alan meets go could have been taken further, but that's nitpicking on a game that delivers a story that works on so many different levels.

What surprised me about the story mode was how long it lasted. While it's limited in terms of locations I still spent around 6-7 hours completing it. Finding all the missing pages would probably have taken me additional time, and it's a good thing you can replay individual chapters to pick up missing pages if you want the full story - or simply want the Achievement for grabbing all the pages. If you compare Alan Wake's American Nightmare to a similarly priced piece of DLC it's easy to see that there is great value here, and then I haven't even mentioned the arcade mode.

Arcade mode is a bit like Horde in Gears of War. You survive against waves of Taken, using weapons and equipment found throughout the map. Killing and dodging attacks while not taking damage builds your score multiplier and the objective is to survive for ten minutes and score as much points as possible.

Sounds fun, and it is to a certain extent. My only problem is that I still don't really like the combat much. Maybe it has to do with me easily freaking out and panicking, but the whole use your flashlight and then shoot recipe just doesn't sit well with me (just give me a flaregun and plenty of flashbangs). However, it should be said that if you enjoyed the combat in Alan Wake this is a rather healthy dose of very challenging combat coming your way. A total of ten maps that you gradually unlock (it's going to take you a while to unlock them all) are there, and as you find the missing pages in the story mode you also unlock additional guns in the arcade maps.

If you enjoyed the original Alan Wake you don't need to think twice about picking American Nightmare up, it's well worth your money and in some ways outperforms the original game. However, the combat still remains a minor issue for me, and it becomes even clearer in arcade mode where it's all that's on offer.

The fact that there are only three areas in the single player portion of the game is a minus, but they are well used, and it doesn't feel repetitive even if the environments are recycled.

What I really love about the game are the different layers of story you get to experience, and the wonderful Twilight Zone like framing it's given, and and who in their right mind can resist the charms of Mr. Scratch?

Gamereactor UK
+
+ Great narrative and wonderfully layered story. + Strong visuals and brilliant live action cutscenes. + Mr. Scratch. + Varied enemies.
-
- Combat still feels a bit tedious. - Voices sometimes stutter due to some technical issue. - Unlocking the maps in arcade mode takes a lot of time.
is our network score. What's yours? The network score is the average of every country's score

"If you enjoyed the original Alan Wake you don't need to think twice about picking American Nightmare up..."

"We'll do what the audience wants."

See behind the American Nightmare.

Take a peek at the American Nightmare. 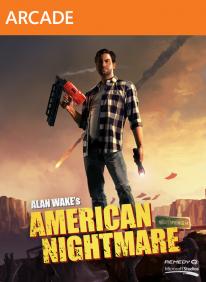